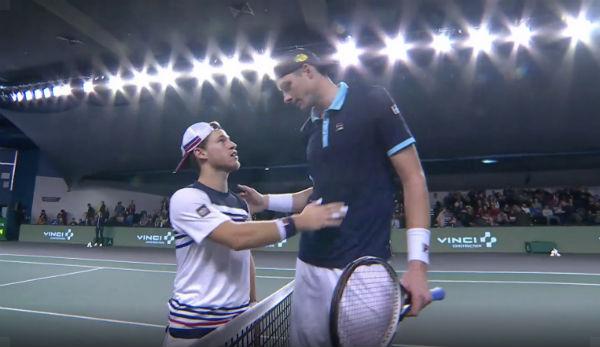 Thirty-eight centimetres difference, but the result could not have been any closer.

If you play tennis, you know it: not always the bigger player wins against the smaller one. But: A duel with 38 centimetres is not every day. Today at the Masters in Paris it was time again: John Isner, 2.08 meters tall, met Diego Schwatzman, 1.70 meters small. And he gave the US-Boy a great fight and took the trick box in between…

Schwartzman is currently ranked at 25th place, the smallest player in the world’s top 200, and the Japanese Yoshihito Nishioka is only 1.70 meters tall. John Isner is the second largest after Ivo Karlovic (2.11 metres).

Karlovic once also won a legendary duel of greatness – mainly because of the hand shakes….