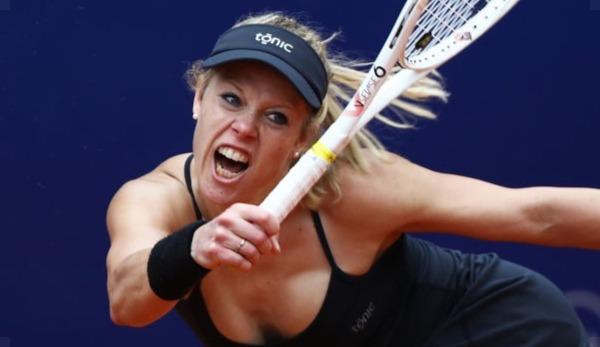 Defending champion Laura Siegemund has missed the quarter-finals of the Porsche Tennis Grand Prix despite a strong performance at times. The 30-year-old, who only returned to the WTA tour at the beginning of April after her cruciate ligament rupture, lost to the world rankings-16th Coco Vandeweghe (USA) in 2:27 hours with 4:6, 6:4, 3:6.

By Ulrike Weinrich from Stuttgart

Nevertheless, the 100th World Rankings can look forward to the next sand court tournaments with confidence. US open semi-finalist Vandeweghe, however, will be in Stuttgart for the first time in the round of the last eight, where she will meet industry leader Simona Halep on Friday.

The Romanian was the first player to reach the quarter-finals late Wednesday evening. At the 4:6, 6:2, 6:3 against Magdalena Rybarikova (Slovakia) Halep had problems at the beginning. On Thursday at 6.30 pm (live at DAZN) Angelique Kerber played Estonian Anett Kontaveit in the round of 16.

Wildcard owner Siegemund also starts against the favoured Vandeweghe furios. The local heroine used her first break point and quickly took a 3-1 lead. But the lack of match practice could be noticed in some phases, especially during longer rallies.

With a backhand mistake, Siegemund allowed her rival to re-break 3:3 and a little later, at her own serve, she wobbled and allowed Vandeweghe to win the set after 43 minutes with a sly forehand.

But the Metzingerin is not one, which gives in small. I really don’t. She also recovered from an early 2-0 deficit in the second round and, as always, had an exemplary body language. Siegemund became more solid and took advantage of her opportunities.

When changing sides and leading 5-4, she pulled an orange towel over her head to concentrate on her important service game. With success: The audience’s favourite won the second round with a winner – and made the hall tremble.

However, Siegemund could not use the tailwind. With her fifth double mistake, she gave Vandeweghe the 2-0 lead. After that, the forces of the outsider dwindled noticeably. The audience nevertheless and rightly celebrated “Siege” with “Laura, Laura” chants.

For Siegemund, the return to the site of her greatest success was connected with many feelings. Also with a view to her severe injury. “I’m already very emotional about my temper anyway. But it’s something special here,” said Siegemund these days.

There is already a lot of hard work behind it, “but maybe even more now. And then you also have gratitude. You’re happy to be able to play again.” And the moments of success on the Centre Court? “They’re another bonus on top,” emphasized the psychologist.

In the Swabian metropolis, Siegemund also played for the first time without her knee bandage, which was “visually no hit either”, the extroverted Swabian joked. Her black knee-length socks may not be either, “but they are really good. And in the end, my health always comes before optics”.

The first time after the knee surgery without a bandage was a positive experience in her opening match on Tuesday against Czech Barbora Strycova (6:4, 6:3). “I can continue to play like this,” announced Siegemund, who was number 32 in the world when she suffered a cruciate ligament rupture at the clay court tournament in Nuremberg in May 2017. But she fought her way back and trained for her comeback in the gym at the Olympic base in Stuttgart, right next to the Porsche Arena.

The former US Open finalist Pliskova (Czech Republic/No. 5), on the other hand, had more trouble at 7:6 (7:4), 6:3 against the Russian qualifier Veronika Kudermetova. Ostapenko will now play Pliskova for the semi-finals.

WTA: Despite Tamira Paszek’s comeback defeats: “I am happy”.
ATP: Budapest: Yannick Maden in a quarter-final for the first time