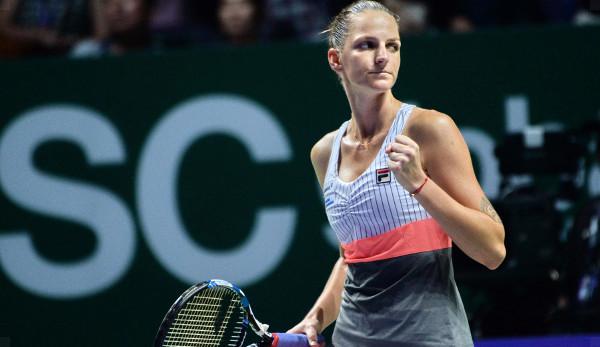 The former number one, Karolina Pliskova, is not getting into full swing this season. However, the Czech U. S. Open finalist of 2016 does not want to be put under pressure and spends all her time in the world.

Karolina Pliskova did not ask twice. After all, betting debts are known to be debts of honour. So the world number five jumped uncapriciously into the swimming pool. Previously, she had lost a round of Schnick-Schnack-Schnuck on the fringes of the WTA tournament in Dubai. But the good mood of Pliskova didn’t stop it.”Why should I?”, she asked into the round.

The US Open finalist of 2016 seems calm these days. And this despite the fact that things have not yet run smoothly in the young tennis year. In the past few weeks, she has already retired from the Qatar Total Open in Doha as reigning defending champion against 18-year-old qualifier CiCi Bellis (USA) in the round of sixteen. The first Grand Slam event in 2018, the Australian Open in Melbourne, ended after the duel with Romanian Simona Halep in the quarter-finals.

I was ill in the off-season and had to take antibiotics – and recently the same thing again. It’s hard to be in top form. But everything could have been even worse,”said Pliskova in an interview with the portal Sport360. com. The Czech number one also had to forego the Fed Cup (3:1 against Switzerland) because of the infection on the penultimate weekend.

Many of the 25-year-old from Louny, whose twin sister Krystina (left-hander) is currently number 76 in the world, had already thought that she would be able to take the big shot in a major tournament last season, having been stopped by Angelique Kerber in the final of Flushing Meadows in September 2016.

However, the 1.86-metre tall right-hander deliberately refuses to let herself be put under (time) pressure in view of an alleged title debut on the dazzling major stage:”If it doesn’t happen this year, then perhaps in the next. I have so many years ahead of me. And there are many players who only won a Grand Slam tournament at the age of 30 or later,”Pliskova emphasized, pointing to another advantage:” I have a game that doesn’t take up so much energy “.

Pliskova, who speaks German because she once lived with her family in Wolfsburg and played at TC Fallersleben, has already reached a milestone. She was the first Czech woman after the great Martina Navratilova to ascend the tennis throne. Between the age of 17. July and 10. In September 2017, she was at the top of the WTA ranking. Privately she seems to have found her fortune, wearing a Polynesian tattoo like her parents Radek and Martina as well as twin sister Krystina. Pliskova has been engaged to Michal Hrdlicka since summer 2017. The former TV sports presenter had a long reputation as “Party-Bad-Boy”in his Czech homeland.

Discussions between the “lovers” (Pliskova) are actually only about the framework of the wedding:”I would rather have a small celebration – and he a bigger one,”Pliskova said with a smile. “We’re on the road all the time, we haven’t had time to find a date yet.”