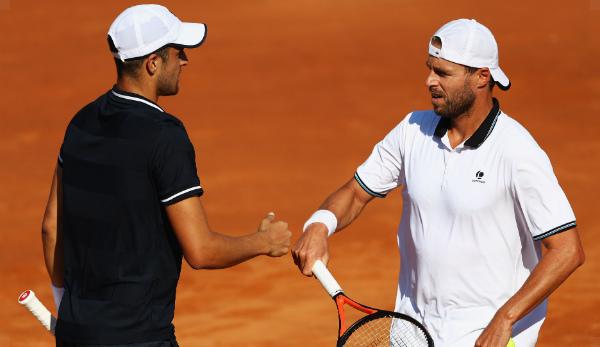 Oliver Marach and Mate Pavic are only one win away from their second Grand Slam coup in doubles at the French Open. The Austrian and the Croatian lived up to their role as favourites in the 6-4, 7-5 defeat of former Paris champions Feliciano Lopez/Marc Lopez (Spain/No. 12). In the final the local heroes Pierre-Hugues Herbert and Nicolas Mahut from France (No. 6), who had eliminated Alexander Peya (Austria) and Nikola Mektic (Croatia/No. 8) in two sets on Thursday in the semi-final, are now waiting.

After 1:32 hours, second seed Marach/Pavic converted their first match point on the Court Suzanne Lenglen, while at the same time Dominic Thiem from Austria fought the Italian Marco Cecchinato for a place in the singles final on the Centre Court.

Especially when it came to using their break balls, the favourites were at the top of their game. They took their first 4-3 lead in the ominous seventh game. At first Marach/Pavic missed a set ball a little later, but on their own serve they made a short process and took the opening round after 42 minutes.

The Spaniards fought bravely, but at 2-1, they initially missed three break points. As a result, however, the Australian Open winners of 2018 lost their 5-3 lead. But in the style of champions, the experienced Marach (37) and left-handed Pavic (24) beat back and equalled again.

Lopez/Lopez had to fend off a match point against Henri Kontinen of Finland and John Peers of Australia in the quarter-finals before they finally triumphed. The Spanish had won the title at the Bois de Boulogne in 2016.

But Marach/Pavic are the second highest seeded team in the double tableau. Lukasz Kubot (Poland) and Marcelo Melo (Brazil) had already said goodbye in the round of 16.

With their second break in a row, the Styrian and Croatian from Split set the course for the final 6-5. A little later they made the success perfect and let their joy run free.

In the Melbourne final at the beginning of February, they had each won their first major title. With their last tournament victory in Geneva, already their fourth coup in 2018, they took the lead again in the Doubles Race to London. Pavic also took the lead in the double world ranking, closely followed by Marach.

Pavic had lost the mixed final at Gabriela Dabrowski’s (Canada) side against Latisha Chan/Ivan Dodig (Taiwan/Croatia) 8:10 in the match tiebreak on Thursday.

Above all, Haudegen Marach could be rewarded for all the setbacks in his career with a final victory on Sunday. “I’ve had a lot of depths. And it wasn’t my fault,” the family man had already said in Melbourne.

In 2012, for example, “Oli” collided with a metal anchor at the edge of the court in Hamburg and had to take a six-month break. He won the court case with a delay, “but I lost a lot of time and money back then, it took me four years. He had already given up his single career – in 2006 Marach was the number 82 in the world – before that. Not least because of recurring wounds.

Last year, he was plagued by a herniated disc, and Marach was more at the doctor’s than on the court in preparation for the current season. “But I have learned very well in the meantime,” says the Styrian, “how to deal with pain.”