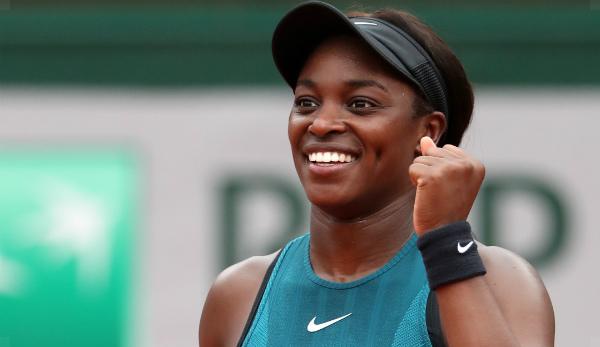 Sloane Stephens is a woman with many faces: On the court, the US Open winner is unpredictable, sometimes even moody outside the court. In the final of the French Open on Saturday against industry leader Simona Halep, Stephens wants to land her second Grand Slam coup.

Recently, at the WTA tournament in Nuremberg, the unpleasant Sloane Stephens (25) was to be experienced again. The reigning US Open queen got a wild card at the last push, now she should do a little harmless promotion for the lovingly organized competition in Franconia before her first match.

But Stephens was in a bad mood, and she did nothing to hide that bad mood either. She answered snappishly, monosyllabically, bored. Not a friendly word came over her lips, it was an embarrassing, unprofessional conversation, hardly to be surpassed in listlessness. The appearance of her top seeded player was also an easy mystery to tournament director Sandra Reichel afterwards: “That wasn’t so nice now.

Sloane Stephens, the surprise finalist of the French Open and opponent of front woman Simona Halep, is someone with many faces. On and next to the tennis court. She fluctuates between glamour and misery during her work assignments in the nomad business of the professionals, and even if she is not standing on one of the large Centre Courts, one never really knows what and who to expect in the next moment: Stephen’s charm bolt, which is of an engaging nature, entertaining, funny, clever in her performance. Or Miss Hochnäsig, always on the brink of arrogance and blasphemy, known among her colleagues for grandiloquent words.

She was once considered the next big American superstar, even in her teenage years, but then, after a promising semi-final push at the Australian Open 2013, she crashed dramatically. Stephens had only made great words, but no more deeds followed. It seemed, as the American legend Chris Evert said, “away from the window.”

But who can predict anything halfway reliable in women’s tennis these days? Before the big tournaments, most professional observers now only assure themselves of one fact: to know that they know nothing. This was also true last year, especially for Stephens. She was an even bigger sensation winner on one of the big major stages than other women in the sky, such as the 2017 French Open winner, Jelena Ostapenko. The unknown 19-year-old Latvian was trailing Simona Halep 4-6 and 3-0 in the Paris final and then turned the plot around as if it was the most natural exercise.

But then Stephens and her New York fairy tale came. She had been injured for months in 2016 and early 2017, still on April 18 of the previous year she was operated on her right foot. She dropped to 957th place in the world rankings in early August 2017, and in early September she suddenly became the US Open winner, perhaps the most unlikely winner in tournament history.

Stephens stands out not only because of her extreme moods, but also as a mood player. At the triumphant US Open the cheerful, splendidly playing mid-twenties could not stop anything, not even top-class competitors like Venus Williams, Julia Görges or in the final Madison Keys.

But after the cup coup the glory was quickly over, not only because of new knee problems. Stephens lost every game she stepped onto the pitch for months, and for 151 days she was unsuccessful. The ascent and descent was more than breathtaking, it seemed as if Stephens disappeared again in the sinking after the one great moment of fame.

To the French Open now, however, she did not come completely without victories and a little self-confidence. In March she won the tournament in Miami, then beat the French women Kiki Mladenovic and Pauline Parmentier in the sand in a Fed Cup international duel. At the preparation tournaments in Madrid and Rome, she reached the eighth-finals, but that’s why nobody had her on the bill for Roland Garros, for the summit at the end of the annual slide exercises. “She almost came back out of nowhere,” says superstar Martia Navratilova.

But the way she appeared in six tournament rounds until the final, this bang effect was almost logical again. Stephens was in top form as a Grand Slam chess player, ice-cold in developing her strategy and moves, equipped with the perfect feeling for space and time. Of course, everything worked for her, the “Zen Master” (New Yorker) on Red Square.

Halep, the fierce fighter, could still despair of her, of her fabulous steadfastness. About the whole quick-change artist Sloane Stephens.