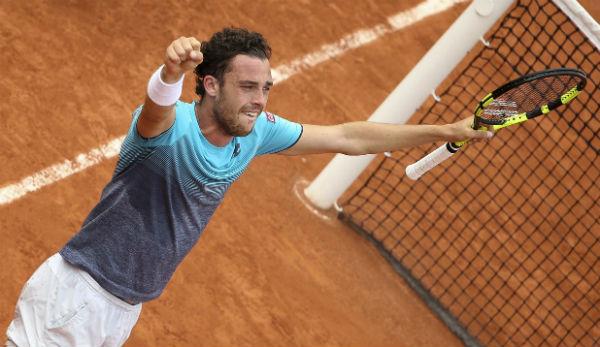 As magical as the journey of the Italian Marco Cecchinato in Paris may seem: He does not want to go into a topic from the year 2015.

When Marco Cecchinato played the Romanian Marius Copil in the first round of the French Open, almost only the iron fans from the two home countries of the professionals had gathered in 16th place. Cecchinato made a daring recovery, an astonishing comeback, after trailing 0:2 sets he turned the match around and won 10:8 in the fifth set.

But his Grand Slam journey went on and on, slowly but surely the tennis world was also impressed by him, especially when he defeated the Spanish top ten man Pablo Carreno Busta in the third round. Two days later he fought down David Goffin (Belgium), eighth in the world rankings, and two days later, now employed on the second main square Suzanne Lenglen, he produced no less than a small tennis miracle against Novak Djokovic – the former ruler also on the Roland Garros tennis court in Paris. “I’m not quite sure I’m just dreaming,” Cecchinato said later.

Cecchinato’s victory run is actually one of those feel-good stories, as they occur again and again in tennis. Paris, the special sand court terrain, the riots in the Red Earth, are a particularly good place for the underdogs/top-rider legends – one automatically thinks of Michael Chang’s title mission in 1989 or also of Gustavo Kuerten’s triumph from nowhere 21 years ago. But how will one judge the advance of Cecchinatos, the fiery Sicilian who has to play Austria’s Ace Dominic Thiem in the semi-final on Friday?

The question is a question because there is a dark spot in Cecchinato’s past, a betting affair that did not put him on hold, mainly because of a procedural error. A good two years ago, the 25-year-old was sentenced to an 18-month break by the Italian tennis association because he was supposed to have deliberately lost a Challenger game in Moroccan Mohammedia in 2015.

The sentence was later reduced to a ban of twelve months before an independent tribunal, because Cecchinato had only told a friend before the match that he felt uncomfortable. Later, the Italian Olympic Committee lifted the verdict and also a 40,000 Euro fine completely, because, among other things, the preservation of evidence by the tennis federation had not gone according to plan.

The case, however, once again highlights the problems that the tennis scene has with fiddling around in tournaments on small and very small stages. But also on the problems that come with an agonizingly long investigation process and the late conviction of accused persons. In the Causa Cecchinato, this means that nobody knows at this time whether the so-called Tennis Integrity Unit (TIU), the team of anti-corruption fighters, is investigating Cecchinato, irrespective of the proceedings that were once brought against him in Italy. Theoretically, the Italian could be banished again at some point, but after this French Open appearance it would then be a completely different celebrity and drama that would surround the matter.

Also the Argentinian Nicolas Kicker was excluded from the competition just three years after a betting offence in 2015 directly before the French Open 2018, during a training session on the Roland Garros course officials appeared and told him that he had to leave the area immediately. Is Cecchinato now facing a similar fate? The Italian remained silent in Roland Garros on the subject, so it remained unclear whether the investigators may have heard him again in the affair – or not. Cecchinato said he only wanted to talk about “tennis here and now”.

Among the many dozen bets offered day after day in the gambler universe are also the many bets for smaller tournaments, which are held in remote locations. Contests that hardly anyone takes notice of. But they are also the ideal platform for various scams. The head of the betting provider Interwetten.com, the Austrian Werner Becher, traditionally sees the focus of the so-called “match fixing” right there, in the province.

“The problems lie with the smaller tournaments, with players from the second row.” Becher once said that he had blacklists of tennis players whose matches were no longer offered. However, he also praised the work of the TIU corruption investigators and found that the tennis organizations could not be accused of cover-up or trivialization.

It was allegedly isolated at Cecchinato in October 2015, when he, then number 143, competed against Kamil Majrchrzak of Poland (then ATP 338). According to the Italian association’s later obsolete investigations, a friend of Cecchinato and his father had bet about 800 euros on Poland Majchrzak’s victory over several betting accounts – in two sets. According to a New York Times report, they were the only ones in Italy to place such a bet. And won: Cecchinato actually lost in 66 minutes 4:6 and 1:6 against the underdog.