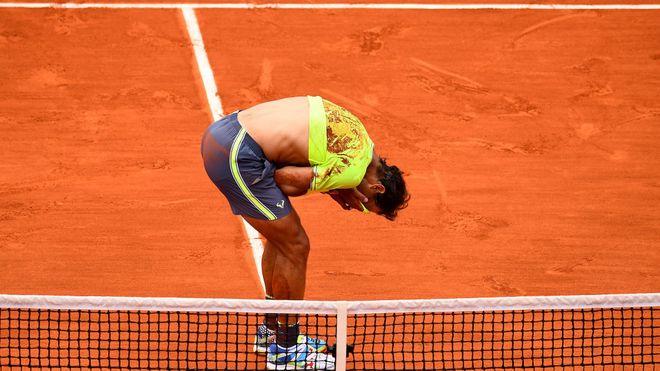 The postponement of the French Open raises three possibilities for Rafael Nadal in his record hunt – but none of them seems all too promising.

It could not have been thought of any other way: The pro tennis pro tour is currently on hiatus due to the corona virus. No tournaments will be held until 26 April. Whether the season can be continued immediately after that is up in the stars.

Even more: The next tournament highlight lies in the distant future – the next Grand Slam spectacle is not scheduled to begin until 29 June in Wimbledon. Which also means that the French Open, originally planned for May and rescheduled for Tuesday, will now only take place from 20 September to 4 October.

What is remarkable about this is that in Paris, Rafael Nadal would have a great chance not only of winning the world’s most prestigious clay court tournament for the 13th time, but also of drawing level with Roger Federer in the eternal list of Grand Slam winners with 20 triumphs.

Nadal: “A lot can happen”
In plain language: The French Open 2020 would be the great chance for the Majorcan – especially on his sandy favourite surface – to immortalise himself in the history books as the record Grand Slam winner. Who knows what will happen afterwards – because the 33-year-old also feels the increasing wear and tear on his body.

So it’s no wonder that Nadal, in particular, is particularly affected by the French Open cancellation: Already after his victory at the US Open last year, the perennial had declared with scepticism: “I don’t know how much longer I’ll be on the court. A lot can happen.”

As a reminder: At the Australian Open in January, he was already eliminated in the quarter finals against Dominic Thiem from Austria. In 14 professional years before, Nadal had only once been eliminated so early. And: His only victory down under so far is already eleven years ago.

Nadal has been waiting for Wimbledon victory for ten years
In Wimbledon, Nadal has also been unable to enter the winners’ lists for ten years, although he reached at least the semi-finals three times.

The US Open, of all tournaments – the last Grand Slam tournament he won – is now the biggest glimmer of hope of achieving the magical 20 Grand Slam triumphs as soon as possible. Here he triumphed twice during the last three editions.

Just eight days after the final at Flushing Meadows on 12 September, Nadal’s favourite tournament is set to begin with the French Open – so he could overtake his permanent rival Roger Federer in just one month.

But the reality is different – the relocation of Roland Garros presents Nadal with a huge dilemma.

After all, knee problems regularly stop the Spaniard after the hard court tournament in New York, so he will have to take a break or continue playing in a weakened state. Moreover, hard court expert Novak Djokovic is currently the strongest he has been in years – and therefore the clear favourite on any surface of this kind. Another factor: With 17 Grand Slam wins, the Serb is also not far behind.