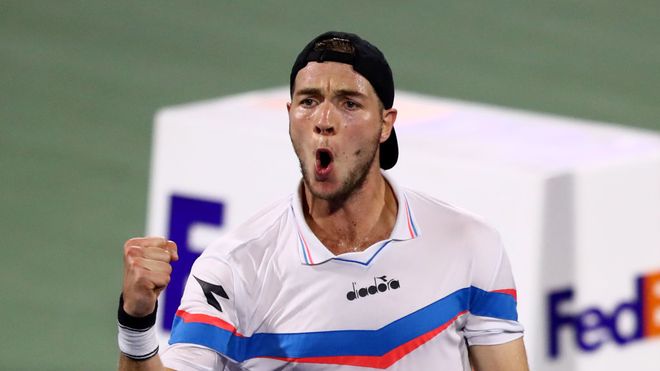 The German Tennis Federation wants to fill the Corona break with a national series. Players like Jan-Lennard Struff and Philipp Kohlschreiber have already been contacted.

Good news for tennis fans, the times of drought are apparently coming to an end: German professionals are expected to bring action back to the courts shortly, the sport is awakening from the Corona break.

A show tournament in Rhineland-Palatinate is planned from 1 May, then the German Tennis Federation (DTB) wants to start a national series from 8 June. Probably with a top-class line-up.

This was confirmed by Vice President Dirk Hordorff to SID on Sunday. “We have spoken with Jan-Lennard Struff and Philipp Kohlschreiber, they are interested and have expressed their willingness”, Hordorff said: “We are planning with 32 men and 24 ladies, the invitations will be sent out on Monday. It is not yet known whether Germany’s top players Alexander Zverev and Angelique Kerber will also be considered as participants.

Further details will be announced on Monday. “The players should be able to play high-level training matches without spectators and for a good cause,” Hordorff said about the project, which was developed in cooperation with the portal tennisnet.com. In Austria, a similar series is to be launched as early as 25 May.

Great anticipation among players already
Beforehand, the eyes of the fans will probably be directed to Höhr-Grenzhausen in the Westerwald district: While all professional tournaments on the tour are cancelled or postponed until at least 13 July due to the corona crisis, the German professionals Dustin Brown (Winsen/Aller) and Yannick Hanfmann (Munich), among others, are to play in the small town in Rhineland-Palatinate.

“The anticipation is already great. We tennis players love competition. Now we have the chance to get a bit of competition much earlier than we thought,” said Hanfmann, number 143 in the world rankings, at Sky: “I actually didn’t think it would work out. A few days ago we got the promise and I’m looking forward to playing a few points again.”

Co-organizer Rodney Rapson told the Frankfurter Allgemeine Zeitung: “Our primary goal was to do something for the players.”