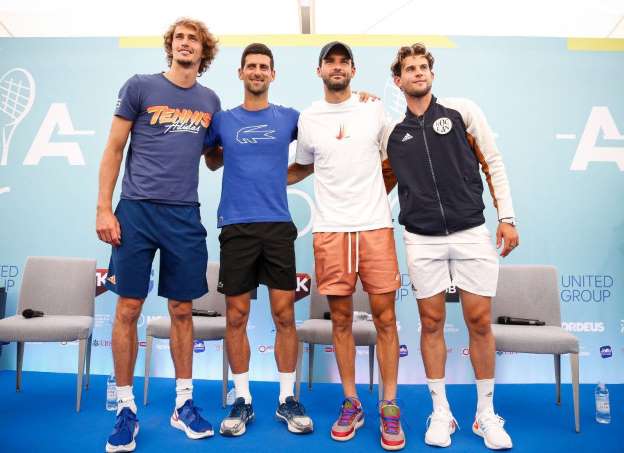 After his hurried departure from the scandalous Adriatic tour, Germany’s number one was no longer heard from, nor was his otherwise tired Instagram channel. Zverev finds himself in domestic isolation – and has to watch to see that criticism of his behaviour is also growing.

Ex-professional Nicolas Kiefer addressed quite clear words to Zverev and his buddy Thiem on Thursday. “You’ve got to get your head in the game and ask yourself what a Zverev, a Thiem and many other players were thinking when they made such an appearance,” Kiefer told the news portal t-online.

Nicolas Kiefer wonders about acceptance
The 42-year-old thus joins the crowd of observers who openly express their incomprehension of the goings-on during the show series.

Hugs, parties with bare torso, events with children – all this seems like a big disaster in view of four now corona-infected professionals after the events in Belgrade and Zadar/Croatia.

The Serbian professional Victor Troicki “even arrived with his pregnant wife,” Kiefer added: “With common sense, they wouldn’t have done that after all. Troicki and his wife had been diagnosed with corona virus.

The same was true for Novak Djokovic, co-organizer and world number one, who was caught in the crossfire.

Clear Covid-19 rules in advance
But Kiefer is also surprised that Zverev and Thiem have given their consent at all. They were actually well advised.

“But when the two top ten players are so naive and still take part, you really have to question whether they have anything other than tennis balls in mind,” said the former world number four.

Thiem’s manager Herwig Straka is annoyed by the impression and especially by the course of the event. He had insisted in advance on receiving clear Covid-19 guidelines, he told the newspaper Der Standard.

“It was urgent that a maximum of 1000 spectators were allowed to come, social distancing was guaranteed. Only under these conditions did I release Dominic,” said Straka.

The players went there “for Djokovic’s sake”. “He called them himself constantly,” said Straka. “It was beyond the control of a manager, it’s all about relationships and friendships between the players. If a Roger Federer or Rafael Nadal calls, you just come.”

Green light for start of the US Open
Aliens in Peru? Safin’s crazy theory