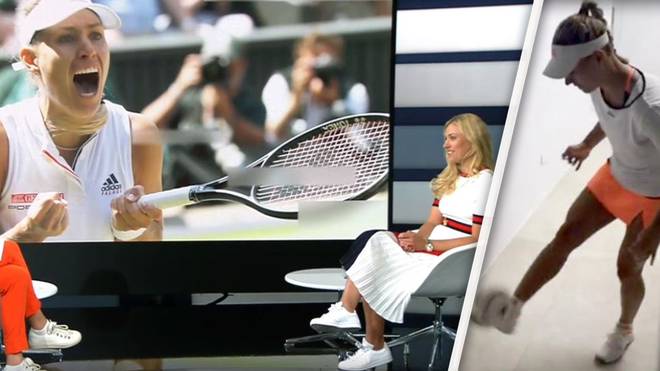 Angelique Kerber is still hoping for a trial training with FC Bayern. The tennis star also talks about Mischa Zverev and his role in Corona.

When asked about her application in the current sports studio on ZDF, Germany’s best female tennis player said: “Unfortunately, it didn’t work out, but maybe it will.

Kerber added to her posted Facebook video from 2017, in which she has a football dancing on her feet, thighs and knees: “I was warming up before a match and then had the idea to record it. And they actually got back to me. It was completely crazy, because I hadn’t expected anything big. And then I expected some news from Bavaria. Maybe we will realize this in the near future.”

Anyway, the three-time Grand Slam winner came out as a football fan – and as a native of Bremen, she was happy about the fact that her home team had been kept in the class. “My heart beats a bit for Werder after all. In the end I was very relieved that they stayed in the Bundesliga.”

Kerber about Zverev and Djokovic
Kerber did not really want to speak plainly about Alexander Zverev, who has been criticised many times for his handling of the corona pandemic, and most recently by Davis Cup captain Michael Kohlmann (“This is not a good thing for sport. A negative perception has arisen”).

“Our Davis Cup captain has already found the right words and assessed the situation correctly. I can only say that he (Zverev, editor’s note) is a very talented player: We will be hearing a lot more from him in the next few years.”

Kerber also avoided judging Novak Djokovic’s unhappy role: “We’ll see where the journey takes us. I think that different people learn from their mistakes. That they are now keeping their cool, also with a view to the tournaments. Everyone wants to play matches again.”

Zverev was a participant in the controversial Adriatic Tour, where several players like organizer Djokovic were infected with the corona virus after lavish parties.

Shortly afterwards, another video with Zverev appeared, showing the world number seven at a party – although he had assured that he was in self-isolation.