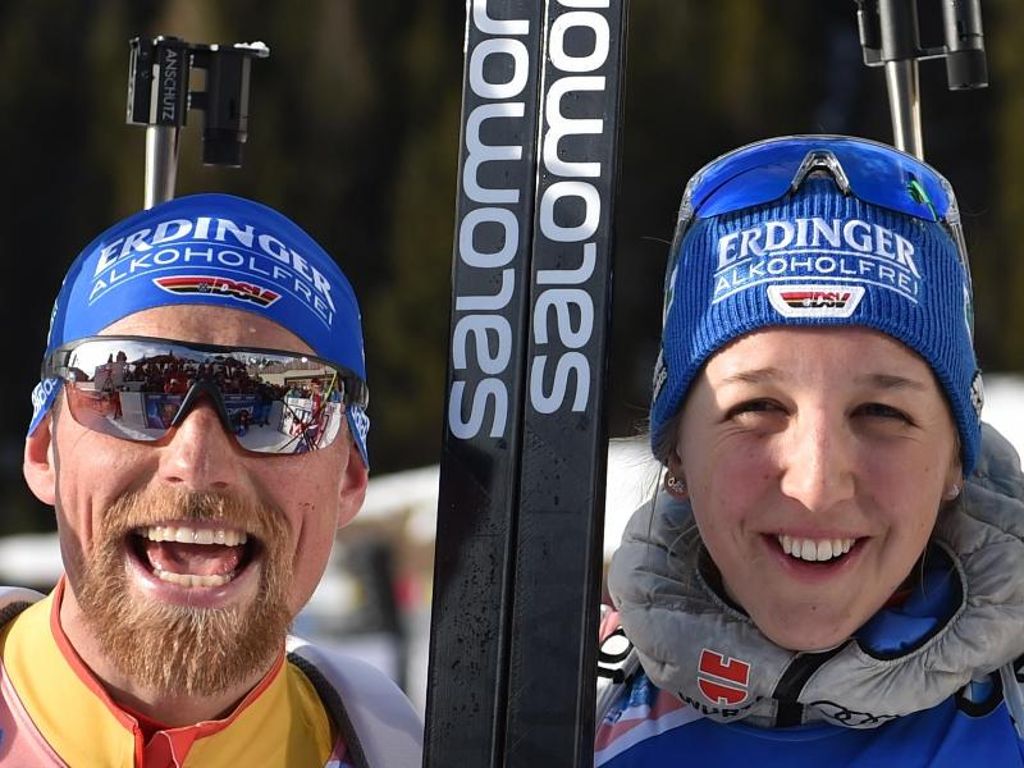 Franziska Preuß and Erik Lesser win the silver medal in the Single Mixed Relay at the Biathlon World Championships in Antholz. Only Norway cannot be beaten.

The huge satisfaction after a “pretty shitty season” just radiated out of Erik Lesser.

With a permanent grin on his face he walked through the Antholz Biathlon Arena, pressed his congenial partner Franziska Preuß very tightly to himself and even warbled a little song in a lively manner. After a tremendous performance, the duo was able to celebrate silver in the Single Mixed Relay at the World Championships in South Tyrol. And Lesser, in particular, enjoyed every second of the success that had turned him from a substitute to a shining star.

“I am overjoyed to be standing here after a pretty shitty season. This gives me the satisfaction. I have repaid the trust”, said the former World Champion Lesser: “Especially after my season it is an extremely cool feeling, it feels mega. Also Preuß, who is also experiencing a hard winter after many health setbacks, grinned over both cheeks and thought it was “totally cool, I am totally happy”.

Lesser shines at his first World Cup appearance after a form crisis
It was Lesser’s first World Cup appearance, after he had even been removed from the World Cup team due to poor form and transferred to the second-class IBU Cup. In the summer he had broken his collarbone in a bicycle accident and was unable to make up the training deficit properly. But national coach Mark Kirchner trusted the 31-year-old, even though he had not even met the World Cup standard – and was not disappointed.

“We sent our best and fastest shooters into the race. Erik fought himself into shape recently. He delivered. You’ve got to give both of them a huge amount of respect,” praised Kirchner visibly satisfied.

Prussia and Lesser were only beaten by the outstanding Norwegians Marte Olsbu Röiseland and Johannes Thingnes Bö. It was the third medal for the German Ski Association (DSV) in Antholz. Prior to this, Denise Herrmann in the pursuit and Vanessa Hinz in the singles had also won silver.

Medal equals redemption for Prussia
For Prussia too, the medal was tantamount to redemption. Time and again the 25-year-old had already suffered health setbacks in her career, and this season too she shuffled from one cold to the next. “This year I was again very frustrated, especially at Christmas,” she had reported in advance: “It takes a lot of energy to build up and stay calm.

Nevertheless, she presented herself in Antholz in strong form, both in the sprint (eighth place), in the pursuit (seven) and in the singles (five) she had managed top 10 finishes – but it had never been enough for the podium. “I am very relieved. I was always very close in the individual races and was bent accordingly,” said Preuß: “That everything worked out today makes us all the more happy and proud.

There will be a rest day in Antholz on Friday. The relays on Saturday and the mass start races on Sunday will conclude the competitions in South Tyrol. With his performance on Thursday, Lesser could even be a candidate for the men’s relay, after his colleagues so far could not convince at the shooting range.