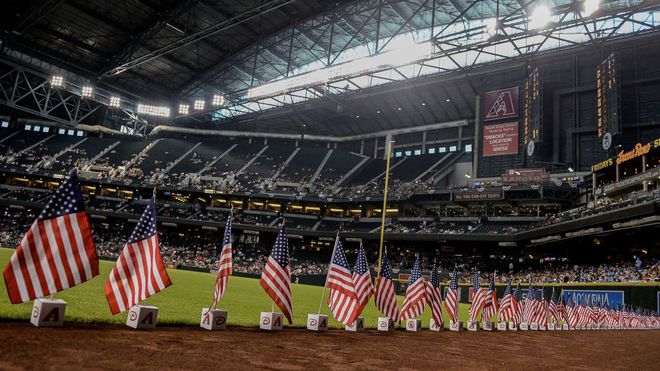 Because of the Corona Pandemic, US sports are also shut down. Those responsible at the MLB are working on a bold plan to be able to play baseball again soon.

The MLB is considering to play all 2430 games in empty baseball stadiums in the US state of Arizona. Ghost games in Arizona is one of the possibilities, according to AP and ESPN, that league representatives and the players’ association discussed in a telephone conference on Monday because of the corona crisis.

MLB commissioner Rob Manfred had recently called for “creativity”, which is what the Arizona plan would still be at the moment. According to AP sources, the plan is still in its early stages and full of obstacles.

MLB in only Arizona would have advantages
But the first advantages are already becoming apparent. For one thing, 15 of the 30 teams are in Arizona for spring training anyway, while the other half are training in Florida, where they could also play thanks to warm temperatures.

Arizona has ten professional training ball parks and a real stadium with Chase Field in Phoenix, the home ground of the Arizona Diamondbacks. All eleven ballparks are located within a radius of about 80 kilometres, in Florida there would be distances of over 350 – an advantage in terms of fewer trips alone, as it would be relatively easier to contain the spread of the COVID-19 virus.

Players and support staff would be clearly identifiable, making it possible to trace any infections.

Triple header with three teams possible
Chase Field also has a lockable roof and artificial turf. On this, so-called tripleheaders, three matches between two teams on just one day, could be played daily.

At least that is what Scott Boras, probably the most prominent players’ agent, suggests. Despite the tight programme that baseball players would expect, including isolation from their families, he believes in the cohesion of the league and players.

“I think the players are willing to do what is necessary because they understand the importance of baseball for their own livelihood and the interest of our country, and to offer a necessary product that will bring joy to all those who are isolated,” Boras said.

He thus emphasized the psychological factor and a return to a certain normality if baseball were to entertain fans at least at home on the couch during the crisis. So bread and games against Corona!

Tampa Bay will stay on course
NHL Draft 2020 is postponed