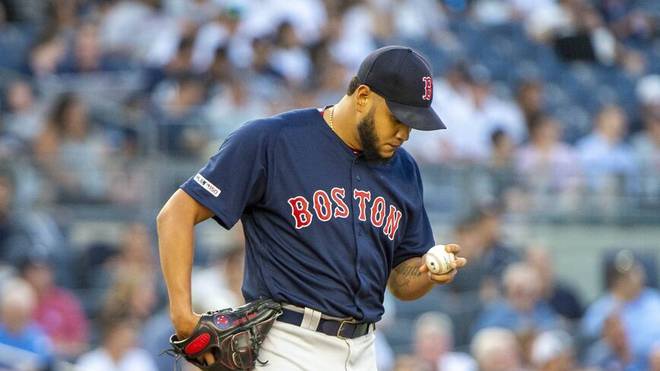 Eduardo Rodríguez of the Boston Red Sox is no longer infected with the corona virus, but is still struggling with the consequences of the disease.

July 2020: After the first corona wave hit the USA hard and most people were forced into domestic quarantine, the spook seems to be over. The numbers are not rising any further and people hope to return to normality. They go out into the streets again, meet friends and enjoy their summer.

But this thoughtless behavior is causing the number of cases to explode again.

While the peak value of new infections per day was still around 35,000 in the first wave, by mid-July up to 75,000 Americans were infected with the virus every day. Eduardo Rodríguez from the Boston Red Sox is one of them.

For the pitcher from Venezuela, the disease should have long-term consequences. Rodríguez’s respiratory disease led to an inflammation of the heart muscle, which made any physical activity impossible for him for a long time.

MLB-Star can only go for a walk after 2 months
Now, at the end of September – more than two months after the diagnosis – the good news has reached the left-hander that he may go for a walk again.

Doesn’t sound like much, but for the professional athlete it is a big step back into a normal life. And above all, the severe course of the disease shows how dangerous Corona is.

For Rodriguez and the Red Sox, however, the news first of all brings relief, even though it is clear that the road back to the field is still a long one.

Red Sox hope for fit Rodríguez
“We are all very happy about this. Eddie was absolutely thrilled,” Ron Roenicke, the manager of the Red Sox, told the Boston Globe: “Hopefully he will be able to do a normal preparation and come back next season and play a great season.

But the manager emphasizes that the pitcher is slow to recover after the heart disease and it may be weeks before he is allowed to run again. For Roenicke, however, the positive news outweighs the negative: “We all know that it will be a slow process, but the good news is that he can start now.

It is to be hoped that Rodríguez has survived the disease without long-term consequences and can work his way back successfully within the next few months.