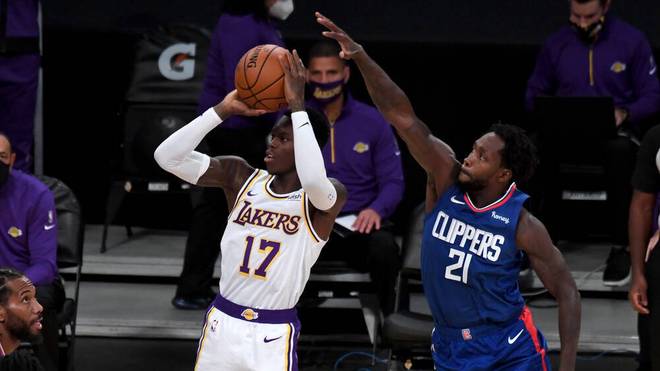 The Lakers celebrate a narrow victory in the preseason game against the Phoenix Suns. LeBron James is on the floor for the first time, Dennis Schröder is injured.

German national basketball player Dennis Schröder of the NBA champion Los Angeles Lakers has injured himself shortly before the start of the new season.

The 27-year-old newcomer suffered a “slight sprain of the ankle”, as Lakers coach Frank Vogel said after the 112-107 in the test at the Phoenix Suns on Wednesday (local time).

A use in the last test game on Friday again in Phoenix is questionable. Schröder himself, however, gave the all-clear. “I don’t think it’s anything we have to worry about,” he said.

Schröder scored seven points in 24 minutes against the Suns. He played alongside top stars LeBron James (11 points) and Anthony Davis (10) for the first time, but they only played in the first two quarters.

Schröder, who hails from Braunschweig, was traded to the Lakers from the Oklahoma City Thunder in mid-November. The new season in the North American professional league NBA begins for the champions on December 22. The opponent then is the city rival Los Angeles Clippers.

In addition to Dennis Schröder, another German was also active in the NBA during the night.

Isaiah Hartenstein played 14 minutes in the Denver Nuggets’ 126-95 win over the Portland Trail Blazers. The 22-year-old was able to show his worth during his performance. Hartenstein was on the floor for 14 minutes, scoring nine points, grabbing two rebounds and dishing out three assists.

The former second-round pick put all four of his throws in the basket and also blocked an attempt.