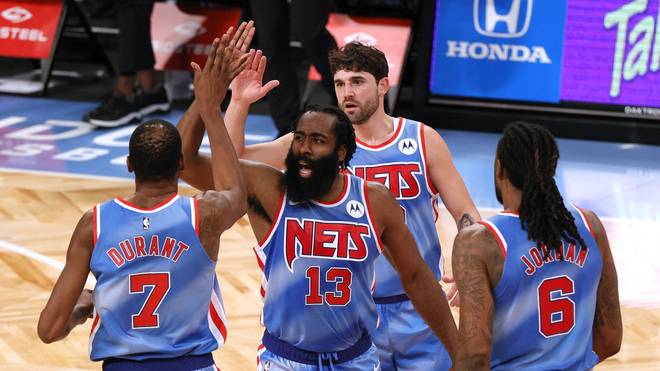 The Brooklyn Nets with their star trio win an overtime thriller against the Hawks. The Dallas Mavericks with Luka Doncic concede the next defeat.

Relief for the Brooklyn Nets.

The good performance of the superstars was also bitterly necessary against the bear-strong Hawks. Quite four professionals from Atlanta cracked the 20-point mark, especially Trae Young with 28 points and 14 assists and Cam Reddish (24 points from the bench) convinced. It was also Reddish who forced the encounter into overtime with a layup.

There, however, the Nets, who again had trouble on the defensive end, prevailed. After the game, Irving praised teammate Harden, who already had 18 points by halftime, for his performance. “We just want him to come into this group and not worry about fitting in, just do his thing,” Irving said.

Meanwhile, the Dallas Mavericks suffered a defeat. Head coach Rick Carlisle’s team lost 104-116 against the Utah Jazz. 30 points from superstar Luka Doncic weren’t enough for the Mavs, who were again without Maxi Kleber.

For the Jazz, who were missing Donovan Mitchell due to a concussion, Rudy Gobert was able to shine. He brought it to a strong double-double of 26 points and 20 rebounds.

For the Mavericks it is already the third defeat in a row. With only eight wins and ten losses, they are outside the playoff places.

Bradley Beal also had another frustrating evening. The shooting guard of the Washington Wizards shone with an incredible 47 points – but was still deeply disappointed at the end. Because the four other starters on his team combined for only 25 points (including German Isaac Bonga with five points), Washington saw no country against the New Orleans Pelicans and had to accept a 106-124 defeat.

It was the 13th consecutive game in which Beal put more than 25 points on the scoreboard. There are currently no wins to celebrate for the Wizards, where the currently in-form Westbrook got a break and Moritz Wagner is still in the Corona protocol.

With a record of 3:11, they are in last place in the Eastern Conference.