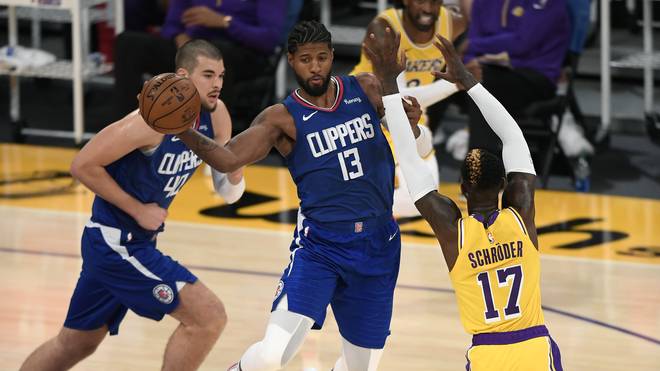 The Los Angeles Lakers start the NBA season with a defeat. The team around LeBron James has to bow to Paul George and the Clippers. Schröder turns up the heat.

False start for the defending champions!

The Los Angeles Lakers, led by national player Dennis Schröder, lost the city duel with the Los Angeles Clippers 109-116 at the start of the NBA season.

The decisive man was, of all people, Clippers superstar Paul George, who had to take a lot of criticism for his performance after last season’s playoffs. But on this evening, the 30-year-old showed what he is capable of with 33 points and an outstanding shooting percentage as well as six rebounds.

Lakers around LeBron with horror start

In the second quarter, the team around their superstars LeBron James and Anthony Davis fought their way back into the game – but in the end George made the difference with 15 points in the third quarter alone.

James scored 22 points in 28 minutes on 17 attempts from the field. The four-time MVP also contributed five rebounds and five assists, but also committed four turnovers. Davis also failed to make his mark on the game with 18 points and seven rebounds.

Lakers newcomer Schröder, on the other hand, whirled hard on the floor, but scored too little from the field. Only five of his 15 attempts found their target. Nevertheless, he performed well with 14 points, twelve rebounds and eight assists, narrowly missing a triple-double.

Before the opening game, the Lakers’ championship banner had been hoisted under the ceiling of the Staples Center and the players had received their diamond- and amethyst-studded championship rings – in front of a still empty crowd. But each player received at least one message via video cube from family members.

The next game for the Lakers is scheduled for the night of Boxing Day (2 o’clock) against the Dallas Mavericks. By then, James, who twisted his ankle in the second half, should have recovered as well. “I drink some wine, which flows directly to my ankle,” joked the 35-year-old.

The Clippers then have to play the Denver Nuggets and will certainly want to take revenge for their elimination in the past Conference Semifinals.