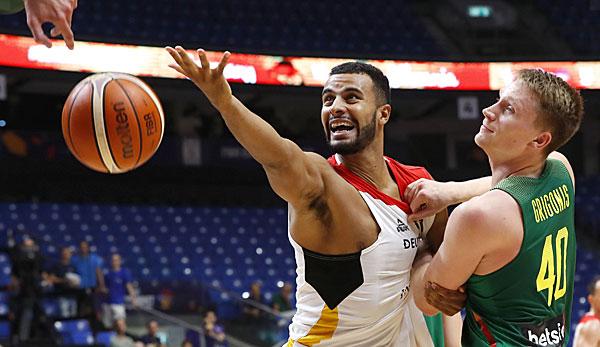 Back on the road to success with full throttle: The German basketball players have digested the crack of Patras and are determined to take the group win in the World Cup qualifier again.

Three days after the defeat in the top match in Greece, the team of national coach Henrik Rödl without Dennis Schröder and Co. beat the underdog Estonia in Ludwigsburg without any problems with 87:70 (41:27). Only minutes later, the Hellenes lost in Serbia.

Johannes Thiemann (16) and Andreas Seiferth (14) were the best throwers for Rödls team, which had already bought the ticket for the 2019 tournament in China in September. After their ninth victory in the tenth game, Germany are once again level on points with the leader of the league, Greece, who took a 61:84 place in Belgrade on Monday. The decision about the group victory will now be made in the last two qualifying games on 21 February in Israel and three days later in Bamberg against the Greeks.

The selection of the German Basketball Federation (DBB) on Friday (84:92) had somewhat lacked the cleverness of the big opponent. But the reaction against Estonia was right. “We wanted to step on the gas and play with a lot of passion”, Rödl said after the game: “Of course there were also a few mistakes. But I’m proud of the team today, the way they played and the way they played.”

Germany had won the first leg against Estonia 86-43 in Tallinn, but the signs before the second duel were different. “Everything will be thrown anew,” said Rödl, who could no longer manage with his two hands when counting his absent top players, at Telekom Sport. In addition to the NBA pros led by Schröder (Oklahoma City Thunder), the 1993 European Champion in Ludwigsburg also had to do without the national players of EuroLeague clubs such as Bayern Munich. In addition, Captain Robin Benzing (Besiktas Istanbul) and the experienced Center Maik Zirbes (Red Star Belgrade) were detached from their clubs.

In the first quarter, the young German team, in which David Krämer, Sid-Marlon Theis and Philipp Herkenhoff made their debut, also noticed the absence of its leading players. In the offensive Niels Giffey took over responsibility and knew how to please. But too many easy ball losses and the lack of intensity allowed the Estonians easy points – with the siren stood a narrow lead of 21:19. The German team pushed in the second game section even harder on the pace, grasped the defensive more resolutely and immediately the guests had problems. Ismet Akpinar threw out the first two-digit lead (14th) with a free throw to 31:21, the intermediate standings were even more comfortable during the break.

The German team, which ran up in Ludwigsburg for the first time in 30 years, continued to prove its physical superiority on the boards even after the change of sides. Thiemann could hardly be controlled for the 47th of the world ranking list, in the attack Rödls’ selection distributed the scorer load on many shoulders. Once again it was Akpinar who set an exclamation mark and raised it to 59:39 by jumping (29th). Rödl demanded concentration until the end – in the end there was a clear victory.

Basketball: Despite a hole of millions: Bamberg doesn’t give up
“Cool experience”: Wagner raves about the All-Star Weekend