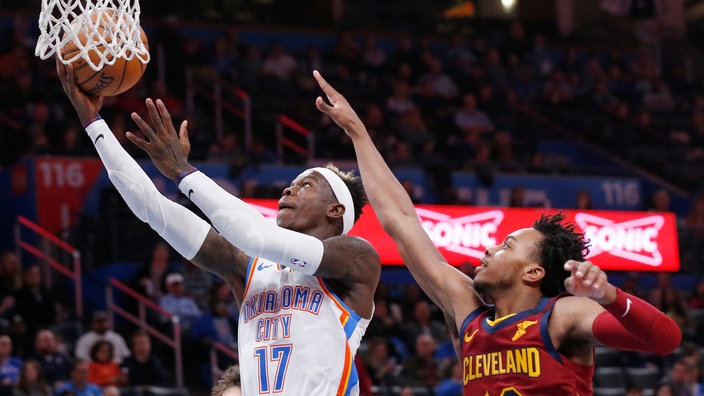 The Oklahoma City Thunder celebrate their third win in a row against the Boston Celtics. Dennis Schröder hits the decisive throw a few seconds before the end.

Dennis Schröder has led his Oklahoma City Thunder with a transformed game winner to the victory against the Boston Celtics.

In a duel with national team colleague Daniel Theis 8.5 seconds before the end, the 26-year-old scored the decisive throw for the Thunder, who thus also won the third game in the series. Oklahoma City are fifth in the Western Conference standings, with 40 wins from 64 games, and remain fully on course for the play-off.

Coming from the bench, Schröder scored 27 points, six assists, two rebounds and two steals in 34 minutes on the floor. On the opposite side Theis scored eleven points, five rebounds and three assists.

Schröder turns last throw into victory
After a balanced start, it looked like the Celtics were going to win the first half of the season, with the Celtics leading by up to 18 points at times in the second quarter. In the third quarter, Oklahoma City’s Chris Paul was the most popular player, scoring 11 points and ensuring that the guests were back to within a point of the final quarter.

As a result, a wild back and forth developed in which neither of the two teams was able to make a decisive break away. After a transformed throw by Jayson Tatum and with his own ball, it looked as if Bosten could clinch the 43rd victory of the season until 14 seconds before the end.

But then came the big moment for Schröder: Chris Paul put pressure on Kemba Walker in the half of the Celtics and made it possible for Schröder to knock the ball out of his hand. By basketball, he finally effortlessly completed the victory of the Thunder. (NBA table)

Wagner and Bonga lose against Heat
However, it set a defeat for Moritz Wagner and Isaac Bonga.

The German duo in the service of the Washington Wizards had to admit defeat against the Miami Heat with 89:100. While Wagner scored four points, four rebounds and one assist in 18 minutes, Bonga scored three points at the end.

With 23 wins out of 63 games, Washington remain in ninth place in the Eastern Conference, trailing the Orlando Magic in the final playoff rank by 19 games before the end of the main round with six wins.