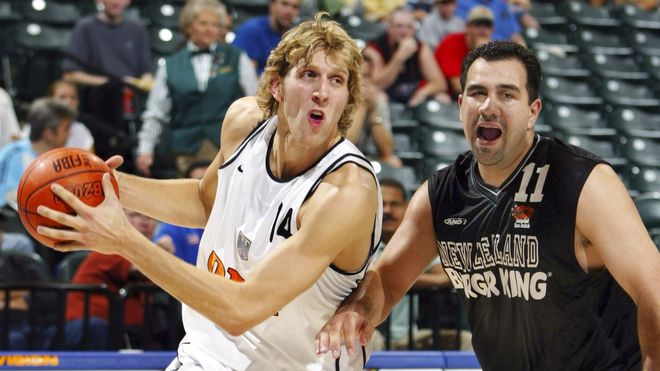 The Dallas Mavericks show their players old pictures of Dirk Nowitzki. The pros around Luka Doncic make fun of him – but Nowitzki counters.

Currently it is not possible to play basketball in the NBA due to the spread of the corona virus. The ideal time for many to watch old videos from the past.

The Dallas Mavericks even posted a video on their Twitter account, showing the current Mavs pros old pictures of NBA legend Dirk Nowitzki.

When these Nowitzki’s saw pictures from the early NBA years, the national team and the Nike Hoop Summit 1998, they first of all made fun of the hair of the man from Würzburg.

While the new superstar of the Mavericks, Luka Doncic, simply called her “awful”, Dorian Finney Smith went one step further: “This looks like Shaggy on SpongeBob.”

Other players also dropped the one or the other line, although Big Man Dwight Powell remarked that Nowitzkis hair is highly underrated because it is “versatile”.

Kleber also jokes about Nowitzki
Besides the hair, the professionals were especially surprised about Novitski’s athleticism and jumping qualities at that time. The general tenor was: “He could actually jump then.”

The German international Maximilian Kleber said to the pictures: “So that’s what he was talking about when he said last year that he had once been athletic.”

Guard Jalen Brunson even doubted the authenticity of the pictures.

Nowitzki of course couldn’t let that sit on him and wrote in the direction of his ex-colleagues: “Luka and Jalen are Haters”.

Finney-Smith: “He is the GOAT”
Of course, all this was said with a wink, which Nowitzki understood without a doubt.

Especially at the end of the video you can see some excerpts of the players telling how good Nowitzki was for them. For Finney-Smith he was even simply “the GOAT”.

Especially the Latvian star Kristaps Porzingis was noticed during the whole video how much he enjoyed to see old pictures of his idol.