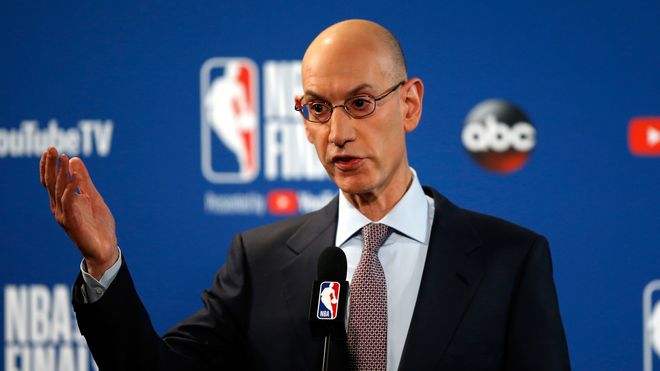 Los Angeles – The fact that entire NBA teams are being tested for the coronvirus in series is being criticized. Meanwhile, commissioner Adam Silver sees another problem.

NBA commissioner Adam Silver has defended the quick corona tests among the basketball pros. Bill de Blasio, mayor of the city of New York, had harshly criticized the actions of the US professional league in view of the long waiting times of ordinary citizens.

Silver: There are too few tests
“An entire NBA team should NOT be tested for COVID-19 while critically ill patients wait for a test,” de Blasio said on Twitter: “Tests should not be for the wealthy, but for the sick.

According to Silver, eight complete NBA teams have now been tested for the virus, as well as other suspected cases on other teams.

“I understand his point, of course, in the sense that it’s unfortunate that we’re in a position where there is a selection in the tests. But the basic problem is obviously that there are too few tests,” Silver told ESPN.

The samples that have been taken have only been in accordance with the instructions of the health authorities, Silver said. The US authorities were recently caught in the crossfire because there are not enough analysis sets available to test for the corona virus.

Durant one in six cases
The NBA had suspended its play indefinitely after the positive test of Rudy Gobert of Utah Jazz. Gobert’s teammate Donovan Mitchell has also fallen ill in the meantime.

There are four cases among the Brooklyn Nets, including superstar Kevin Durant. “We followed the doctors’ instructions and looked at the group of teams that had the most intensive contact with the infected players,” Silver said.