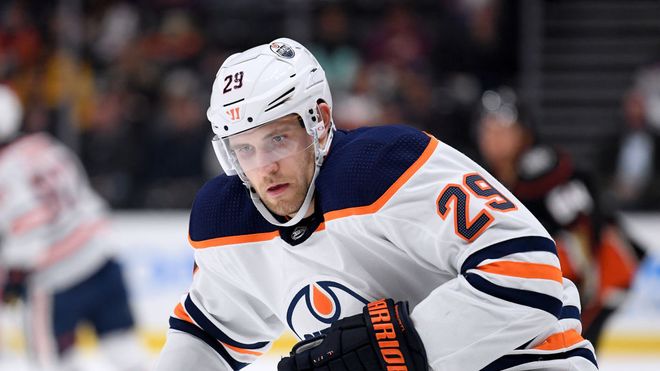 The Edmonton Oilers improve their playoff chances in the NHL by a clear win against the Columbus Blue Jackets. Leon Draisaitl remains without a goal.

Ice hockey star Leon Draisaitl (24) remains on playoff course with the Edmonton Oilers in the NHL despite one of his now rare games without a goal. The Canadians defeated the Columbus Blue Jackets 4-1 in front of their own audience and finished fourth in the Western Conference.

With 110 scorer points (43 goals, 67 assists) the Cologne-born Draisaitl is still the clear number one in the scorer list. His closest rival in the Art Ross Trophy, Draisaitl’s congenial team-mate Connor McDavid, moved up to 14 scorer points against the German thanks to his goal against Columbus. The Oilers will play 13 games in the regular season.

Dominik Kahun was happy about his twelfth goal of the current season. The 24-year-old international, who had only been traded to the Buffalo Sabres by the Pittsburgh Penguins at the end of February, scored the only goal for his new employer in a 3-1 win at the Philadelphia Flyers. As a result, the Sabres’ chances of one of the 16 places in the final round continued to dwindle.

Islanders threaten to miss playoffs
Meanwhile, the negative series of national goalkeeper Thomas Greiss and the New York Islanders continues. The 34-year-old lost with the Isles against the Carolina Hurricanes 2:3 after extra time. The Islanders are in danger of falling out of the playoff ranks after their sixth consecutive defeat.

In sixth place in the Eastern Conference, the Islanders are only two points clear of the ninth-placed Canes 15 games before the end of the main round. Greiss showed a decent performance and parried 25 of the 28 shots on his goal. Tom Kühnhackl was not used by the hosts.