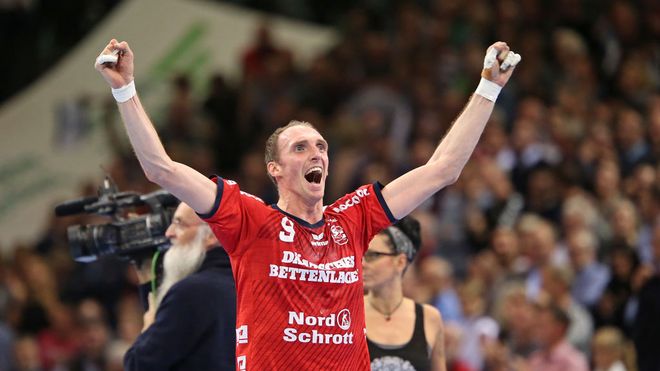 Due to the cancellation of the HBL season, the SG Flensburg-Handewitt cannot bid farewell to Holger Glandorf at the last home game. The manager announces a farewell game.

The SG Flensburg-Handewitt honoured handball star Holger Glandorf in a virtual farewell party on Thursday evening to mark the end of his career.

At the same time, managing director Dierk Schmäschke announced that the 37-year-old 2007 World Champion will be inducted into the club’s Hall of Fame.

“That’s where you belong, and that’s what we’ll do exactly when the hall is full again,” said Schmäschke: “You have to bow down to a career like that. Schmäschke also announced there’s to be a farewell game for Glandorf.

Glandorf thanked the fans: “Especially in the bad times with my injuries you stood by me and supported me.” He said his wife and children had always had his back.

Glandorf made his debut in the Bundesliga in 2001 for HSG Nordhorn, in 2009 he changed to TBV Lemgo. He won the EHF Cup with both clubs (2008 and 2010). Since March 2018, Glandorf has also been the best field goal scorer in Bundesliga history, and he is due to move to the Flensburg office in the summer.

“I was allowed to take part in and enjoy a great time in handball,” Glandorf had recently said in the SID interview: “We won many titles – whether with Nordhorn or Flensburg. But most of all, I was able to experience a lot in handball, travelled around a lot and saw many interesting corners of the world.