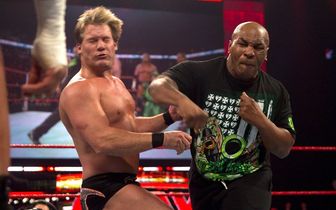 After the big brawl at the Show Fighting League AEW, Mike Tyson seems to be wrestling – or boxing – there too. Opponent Chris Jericho explains the stand.

Will the big fight that boxing legend Mike Tyson caused at WWE rival AEW lead to a side trip to the wrestling ring?

Wrestling legend Chris Jericho, Tyson’s opponent in the segment on the TV show Dynamite, suggests this in an interview with ESPN – and gives an indication of how the show match might go.

Mike Tyson could wrestle or box on AEW
“The idea of making more out of it is clear,” says the 49-year-old: “That is the train of thought on both sides, I think. We think and discuss. Chris Jericho versus Mike Tyson – in a wrestling match, a street fight, a boxing match – that would be huge.”

Tyson has had several major wrestling appearances: He brought a huge boost to WWE in 1998 when he was the guest judge for the WrestleMania main match between Shawn Michaels and Stone Cold Steve Austin. In 2010, the now 53-year-old was once again guest host on the TV show Monday Night RAW, where he had already met former WWE champion Jericho, got himself into a match with him against D-Generation X – but then turned on him and knocked him down.

With a “real match” as a wrestler, Tyson would follow in the footsteps of prominent colleagues such as Muhammad Ali, Floyd Mayweather and Tyson Fury who have already done so.