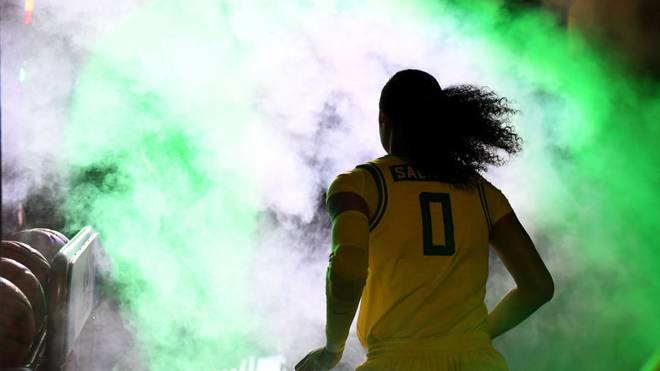 Satou Sabally is about to make her debut in the WNBA. The premiere will be a special event for the national player under two aspects.

The start of the season in the WNBA has a special meaning for national player Satou Sabally not only because of her debut.

The first weekend is dedicated to the “Black Lives Matter” movement.

“This is very important,” said the daughter of a German mother and a Gambian father in a video conference: “80 percent in the league are black. I support movements for social justice.”

The newcomer from Berlin will play her Dallas Wings against Atlanta Dream on 26 July at the IMG Academy in Bradenton/Florida in her first game.

Sabally feels safe in the bubble
The main round will be played there in a shortened form until 12 September, followed by the playoffs.

All twelve teams have been isolated in the Sunshine State. where the pandemic is very much in evidence. Sabally therefore finds it “quite strange to play in Florida. But we feel safe in the bubble,” said the debutante.

Sabally, as number two of the 2020 draft in focus, is “totally excited that it’s finally starting”.

The winger has a lot of plans: “Our team is very talented. We are going to surprise some people. We’re the underdogs, but we want to win every game.”