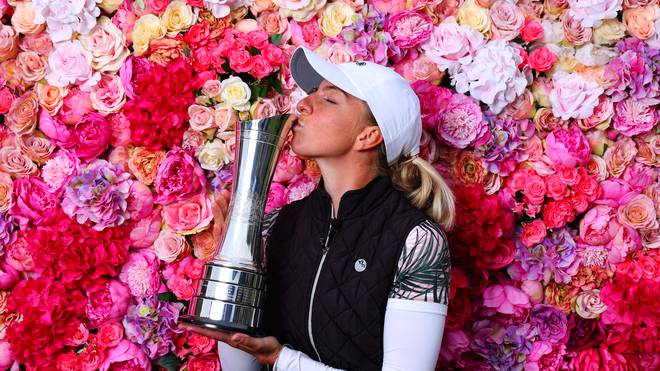 When she is no longer allowed to start on the LPGA tour, Sophia Popov wants to end her career. She helps a friend as a caddie. Now she sensationally wins a major.

When the last ball rolled into the hole, Sophia Popov’s eyes already filled with tears.

The 27-year-old from Weingarten had just sensationally won the British Open in Troon, Scotland, which no German player had ever achieved since 1930 in a total of 290 major tournaments.

If you look at the world rankings, you would have thought that Caroline Masson or Sandra Gal would have won this sensation – but not Popov, who had started as number 304 in the world.

On the last few meters of her fantastic golf trip, she imagined herself in a famous movie. “It looked like Lord of the Rings,” she said as she strolled over the course on the purist west coast of Scotland: “But it was totally beautiful. Because the coronation with the longed-for treasure was imminent.

Popov had an enormously difficult time behind her, as she told in tears at the award ceremony: “In the past six years I had to overcome many problems, especially with regard to health. I am simply glad that I have made it”.

Particularly at the beginning of her professional career, health problems prevented her from making the big breakthrough. “I was thrown a few stones in my path,” she said. Only after many doctor’s appointments was an infectious disease (Lyme borreliosis) diagnosed, which is kept in check with the right diet and exercise.

Furthermore, Popov, who was born near Boston, revealed that she had “almost stopped playing” last year, before she added with the cup in her hand in relief: “Thank God I didn’t do that.

It was also worth it from a financial point of view. With her sensational triumph she collected prize money of 670,000 dollars (approx. 575,000 euros) in one fell swoop.

Only a short time ago, this would have been unimaginable when Popov lost his eligibility to start the LPGA tour at the end of 2019. She was present at tournaments, but only as a caddie, i.e. bag bearer, for her good friend Anne van Dam – a major victory seemed to be in the distant future.

Only at the beginning of August Popov qualified with a top 10 place at a tournament in Ohio. She did not put any pressure on the Major at first: “The British Open are a bonus because they were never on my schedule. I was happy to be able to play here at all”.

Accordingly, she appeared at the beginning and surprisingly took the lead with a husky third round, in which she had only beaten 67 strokes despite strong wind and was the first player of the tournament to remain without a bogey.

But at that moment the tide turned, making her later triumph all the more impressive. Popov had to endure great pressure before the final round – and felt it too. “On the last day it’s just me against pressure,” she said in advance.

The pressure was felt right at the beginning of the round when Popov started with a bogey. The German quickly stabilized, but the Thai Jasmine Suwannapura, who was behind her, built up real pressure with four birdies in a row.

Popov’s lead melted away in one fell swoop and many expected that the long-time GC St. Leon-Rot top golfer would not be able to withstand the pressure. But Popov proved everyone wrong – also because she had decisive help at her side.

“I was so nervous today. I’m so grateful to my boyfriend for helping me stay calm,” said Popov, thanking her partner Max Melhes, who acted as her caddie at the British Open.