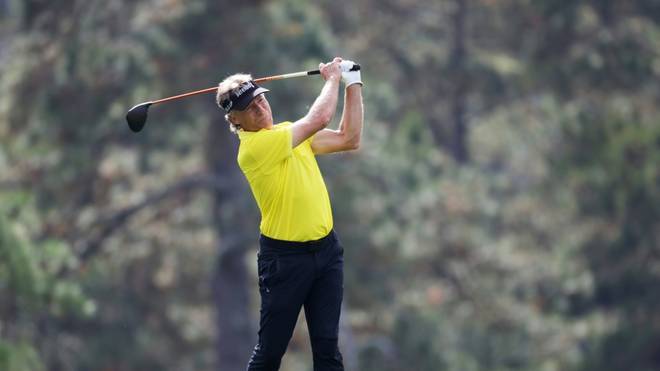 Bernhard Langer finishes the 84th US Masters in Augusta/Georgia with an excellent result. The 63-year-old finished ahead of defending champion Tiger Woods.

Age record holder Bernhard Langer has finished the 84th US Masters in Augusta/Georgia after four rounds with an excellent result of three strokes under par (285) on rank 29.

The 63-year-old, who had won the famous major tournament in 1985 and 1993, played a 71-round at the end of the tournament after he had started his 37th Masters on Thursday with a 68. This was followed by two rounds of 73 strokes each.

The winner was US American Dustin Johnson with the Masters record of 20 shots under par (268). Defending champion Tiger Woods, who experienced a debacle on the final round with ten shots on the twelfth hole, finished in 38th place with 287 shots.

Langer, who was the first number one in the newly introduced world ranking list in 1986, had set a record on Friday at the Augusta National Golf Club. At 63 years, two months and 17 days, he became the oldest player in tournament history to make the half-time cut. He thus replaced the American Tommy Aaron, who mastered the cut in 2000 at the age of 63 years, one month and 16 days.

Before the tournament, Langer had named two goals in an interview with SID: “I want to get on the leaderboard and make the cut. I don’t think that many people have already done that at 63”. Both of these goals were fulfilled for the long-running golf pro who has dominated the Champions Tour for players over 50 for over a decade. On the first 18 holes, he was even on seventh place in the meantime, making the cut the next day.

From the drug swamp to the golf olymp