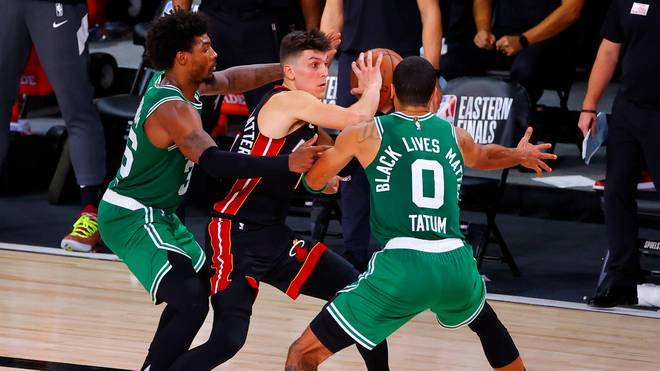 The Miami Heat are about to move into the NBA finals. In game 4 Rookie Herro walks on the tracks of Magic. With Boston, Tatum is initially off the roll.

What a herro show! While the Boston Celtics are on the brink of extinction, the Miami Heat are only one victory away from reaching the NBA finals.

Miami beat the Celtics in Game 4 of the Conference Finals in the east with 112:109 against the national player Daniel Theis and took a 3:1 lead.

Theis played a good game with eight points and nine rebounds, but could only partially slow down Bam Adebayo (20 points and twelve rebounds).

Herro on the tracks of Magic
Despite the strong performance of Adebayo and Goran Dragic (22 points), Rookie Herro was without doubt the match winner in the Heat. The only 20-year-old scored 37 points coming from the bench.

The only other player who scored at least that many points as a 20-year-old is NBA legend Magic Johnson, who scored an incredible 42 points for the Los Angeles Lakers in Game 6 of the 1980 NBA Finals.

Dwyane Wade’s heat-rookie-playoff record of 27 points was easily pulverized by the Guard. “I feel good. But there’s still a lot of work to do. We are only 3-1 ahead,” said Herro.

Tatum sleeps through first half
The Celtics, on the other hand, had to wait a long time for their best player, Jayson Tatum, to join the game. Although he failed to score a point in the first half, he ended up with 28 points, 16 of which he scored in the third quarter alone.

“I did not score a point in the first half. This is unacceptable. I know that I have to play better. That’s what I tried (in the second half, editor’s note),” Tatum said after the game.

Tatum received support mainly from Jaylen Brown (21 points) and playmaker Kemba Walker (20 points). The excellent defender Marcus Smart, on the other hand, only got ten points and only scored one of his eight attempts from distance.

The possibly already decisive game 5 of the Eastern Conference Finals will take place in the night of Saturday (2.30 a.m.). A win would make it the sixth final for Miami in the past 15 years.