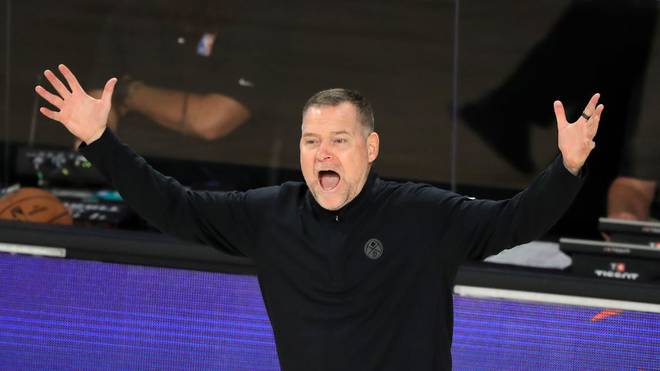 The Los Angeles Lakers around superstar LeBron James take a big step towards the finals in the NBA playoffs. The head coach of the Nuggets is raging against it.

In the NBA playoffs, superstar LeBron James’ team celebrated a 114-108 win over the Denver Nuggets in game four of the Western Conference Finals, giving them a 3-1 lead in the series.

After the Nuggets had celebrated their first victory in game three, and that in an impressive manner, the Lakers struck back. Especially Anthony Davis made his mark on the game with his performance. Although the Big Man did not get past five rebounds, he scored a strong 34 points and was thus the top scorer of his team.

Many free throws for Lakers

LeBron James was the second best pitcher in his franchise with 26 points, nine rebounds and eight assists. In the nuggets, it was once again Jamal Murray who led his team with 32 points. However, with 17 and 16 points each, Jerami Grant and Nikola Jokic could not provide enough help to ensure a possible victory.

After the game, Nuggets head coach Michael Malone was annoyed. The reason for this was the many free throws awarded to the Lakers. The franchise from L.A. was allowed to take part in a total of 35 free throws. Just the 24 points that only James and Davis scored were more than the 23 free throws that the nuggets were allowed.

Malone would like to take a similar path with his team as Lakers Coach Frank Vogel has taken with his team. On Wednesday, Vogel said that the Lakers had come to the NBA after “only” ten free throws in the first three games for LeBron James.

Nuggets want to complain to the NBA

“I think I need to go through the proper channels, as they did, to see if we can figure out how to get more free throws,” Malone said.

Whether the Lakers’ complaint to the league with the 35 free throws in game four has already had an effect, the nuggets coach did not want to answer.

“All I know is that they had 35 and we only had 23. Late in the game, Jamal Murray attacked the basket a few times and it appeared to be a contact. We will look into it and send in the clips. We will contact the NBA and add our comments. The NBA is an excellent listener. Maybe some of those fouls will be recognized as such in the next game,” Malone continued.

Davis with a moment of shock

Already in the first quarter, the Lakers had quickly presented in the evening and brought 37 points on the scoreboard. Head Coach Frank Vogel’s team went into the break with a five-point lead. In the third section, the nuggets again scored two more points – as in the second quarter. Although Denver could not be shaken off, they could not seriously endanger L.A. either.

Anthony Davis provided a moment of shock. Less than seven minutes before the end, the 27-year-old landed unluckily on his left foot at a jumper and initially only limped. After a break, however, Davis was able to continue playing and impressed with eight Lakers points in a row.

The possibly already decisive fifth encounter rises in the night to Sunday. If the Lakers manage to win, it would be the tenth time LeBron James has participated in the NBA finals. The Nuggets, on the other hand, will have to try to make up a 3-1 deficit for the third time in a row.