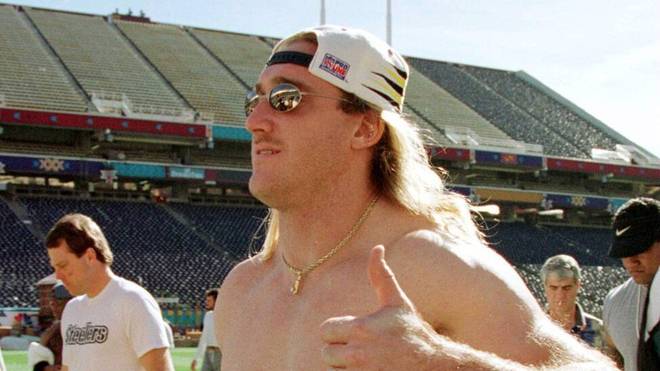 NFL legend Kevin Greene has died at the age of 58. He was one of the greatest quarterback scares – and also stepped into the wrestling ring.

The NFL is mourning the loss of one of its best defensive players of all time – and one of its most legendary guys: Kevin Greene has died at the age of 58.

Kevin Greene legendary in the NFL for his sacks

At his career peak, Greene, who also stood out from the crowd with his long-haired look, was the league’s biggest quarterback terror. The New York native brought down quarterbacks 160 times with his infamous “sacks” before a pass attempt. Only Bruce Smith (200) and Reggie White (198), also deceased at an early age, were more successful.

Among his greatest moments was an important game with the Rams against the 49ers in 1988, in which he drove the great Joe Montana to despair and ended up sacking him four and a half times by official count.

Greene – who, as the son of a U.S. soldier, also lived in Germany for three years and made it to the rank of captain in his own military career – was honored for his outstanding performance in high school and in college with the Auburn Tigers. In 1996, he was named NFL Defensive Player of the Year, was subsequently also selected to the All Decade Team of the Nineties, and in 2016 was inducted into the Pro Football Hall of Fame.

After Greene’s passing, various stars of his era expressed their grief. “As much as I hated playing against him, I loved everything about him,” wrote Green Bay’s iconic playmaker Brett Favre, who stated that Greene was “like a brother” to him. Super Bowl opponent Troy Aikman tweeted, “He was a tough rival in our active days and one of the most genuine guys off the field.”

Greene’s legacy also includes winning the Super Bowl with Aaron Rodgers’ Green Bay Packers as outside linebackers coach in 2011 – and several forays into the wrestling ring.