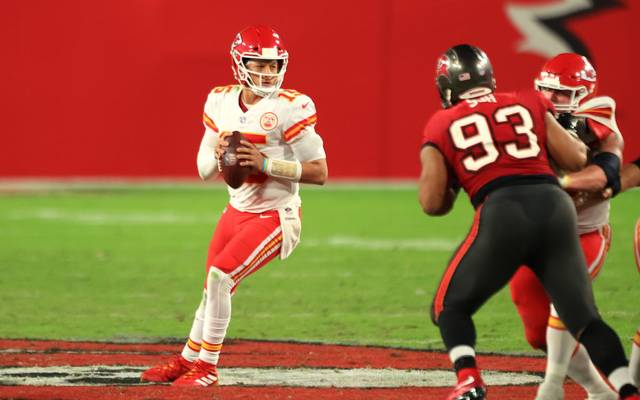 Patrick Mahomes is the winner of the eagerly awaited duel with Tom Brady. The star quarterback and receiver Tyreek Hill are brilliant.

Thanks to the historic performances of Patrick Mahomes and Tyreek Hill, the Kansas City Chiefs beat the Tampa Bay Buccaneers.

Hill was only the fifth receiver in history to score 260 yards (269) and three touchdowns, the defending champion defeated Tom Brady’s team 27-24.

While it was Kansas City’s tenth win in the eleventh game, the Bucs’ season remains volatile. After twelve games, Tampa Bay has seven wins and five defeats on the books.

Brady is now only three interceptions away from his career record of 14 (2002). Mahomes has only two interceptions for 30 touchdowns – the best ratio in NFL history.

This season the Wide Receiver has already broken the magic mark of 1000 yards.

Mahomes threw for 359 yards in the first half – no one else had done so much in the first two quarters in the past 20 years.

The Chiefs were dominant for a long time and went into the final quarter with a 17-point lead before Brady found Mike Evans twice. But in the final ten minutes, Mahomes kept possession of the ball in order to get the win over time.

Of four direct duels, Mahomes and Brady have now won two each.

Broncos without quarterback no chance

The Denver Broncos, who were without a real quarterback due to Corona regulations, did not stand a chance against the New Orleans Saints in a 3-31 win. Wide Receiver Kendall Hinton, who stepped in as quarterback, only managed a nine-yard pass for 13 yards in the entire game and also made two interceptions.

Meanwhile, the outstanding Aaron Rodgers (4 touchdowns, 211 yards) led the Green Bay Packers to a 41-25 lead over the Chicago Bears, who have now lost five games in a row after a strong 5-1 season start.