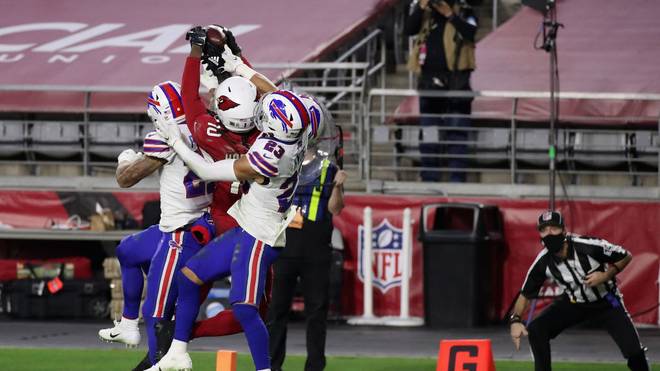 The Arizona Cardinals cheer in the madness game against the Buffalo Bills in the very last second. Quarterback Kyler Murray throws an incredible Hail Mary at DeAndre Hopkins.

Kyler Murray and DeAndre Hopkins of the Arizona Cardinals have made the NFL fans go crazy!

In a crazy game against the Buffalo Bills, Quarterback Murray threw a Hail Mary from about 43 yards in the last seconds of the game towards the end zone – where Hopkins caught the touchdown two (!) seconds before the end of the game for the Cardinals’ 32:30 victory!

Especially annoying for the Bills: Only 30 seconds earlier they had actually turned the game in their favor with a 4-yard touchdown from quarterback Josh Allen to Stefon Diggs at 30:26 – or at least they thought so until Murray unwrapped the Hail Mary.

The game had already started with a curious move in which Wide Receiver Isaiah McKenzie threw a touchdown pass to Allen. At the beginning of the third quarter, the Bills were comfortably ahead 23-9 after a 22-yard touchdown catch by Cole Beasley.

However, the Cardinals then turned up the heat and scored 17 points in a row. Once again, Murray scored the two touchdowns himself! This makes him the first quarterback since Cam Newton 2015 to score ten touchdowns in a single season – and we’re only writing week 10!

Murray threw for a total of 245 yards, but also afforded himself an interception. Allen scored 284 yards and two touchdowns, but he also made two interceptions.

Cardinals on a par with Rams and Seahawks

With a 6-3 balance, the Cardinals are now in the middle of the battle for the divisional title in NFC West and are level with the Los Angeles Rams and the Seattle Seahawks.

In AFC West, the Bills are at the top of the table despite the defeat with a 7-3 record.