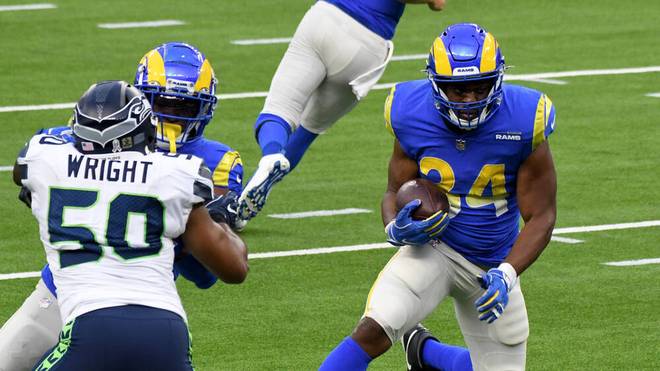 The Rams score an important victory against the Seahawks. Star quarterback Russell Wilson experiences a pitch-black evening. QB Drew Brees injures himself at the Saints.

The Seattle Seahawks have the worm in them! The NFC West favorites suffered their second consecutive defeat in the night to Monday, losing the game at the Los Angeles Rams 16-23.

Especially star quarterback Russell Wilson experienced a pitch-black evening: He stayed under 200 yards for a long time, made two interceptions and had to take six sacks.

For Seattle, Jason Myers still had a success. He set a new distance record for the Hawks with his field goal of 61 yards. It was also the longest field goal of the NFL season so far.

After ten games, the Seahawks are only third in the NFC West with a 6-3 record, behind the Rams (second place) and the Arizona Cardinals, who won against the Buffalo Bills in the evening due to a crazy Hail Mary.

The LA team got into the game better and took a 17-13 lead after 30 minutes with good passing and 221 yards thrown by their quarterback Jared Goff.

Due to Wilson’s weak performance, the Seahawks’ offense was barely able to catch up with the Rams’ lead. Star receiver D.K. Metcalf was also completely deregistered by Rams cornerback Jalen Ramsey.

The Rams only allowed one field goal in the last quarter and brought the important victory home safely.

In the game against the San Francisco 49ers (27:13 victory) the experienced player had to stay on the sidelines with an injury in the second half.

According to ESPN, the 41-year-old suffered a rib injury from a sack of Kentavius Street and was unable to return to the field.

He was replaced by Jameis Winston (63 yards), who had moved from the Tampa Bay Buccaneers to the Saints before the season. Despite Brees’ retirement, the Saints celebrated their seventh win of the season.