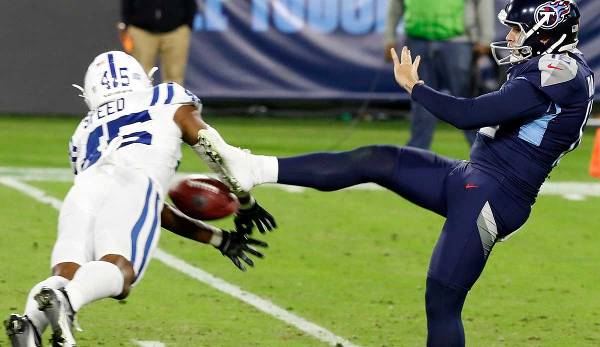 To kick off the 10th NFL game day, the Tennessee Titans are giving the Indianapolis Colts a lead because their special teams have multiple failures.

Actually, the Tennessee Titans looked good in the Thursday Night Game to kick off the 10th NFL Game Day.

In the first half, the team around quarterback Ryan Tannehill scored two touchdowns and a field goal. First, D’Onta Foreman caught a pass from Tannehill, then Jonnu Smith ran out of yard to score the next touchdown. With a 17:13 lead the game went into the break.

But after halftime, the game changed, and the Titans’ special teams played a major role in this. At the end of the third quarter, it took just under a minute for the Colts to turn the game upside down.

Faux pas of the Special Teams

In a fourth-and-goal attempt, the Titans were able to stop their opponent, but then disaster struck. After a bad drive with only a few yards of space, Tennessee had to score. But Punter Trevor Daniel’s ball slipped over his foot, which flew off to the side and hit the ground after only 17 yards. A gift for the Colts, who were able to pick up the ball so close to the opponent’s 27-yard line.

The following short drive was completed by birthday boy Nyheim Hines with his second touchdown of the day. Anyway, the running back of the Colts was a great performance. He had already put his team on the scoreboard in half one. He also scored 115 yards.

But after the failed punt, things were to get even worse for the Titans. After an unsuccessful drive without a new first attempt, Daniel’s next punt was blocked by Colts linebacker E.J. Speed, picked up by cornerback T.J. Carrie and carried back into the end zone just 59 seconds after the touchdown.