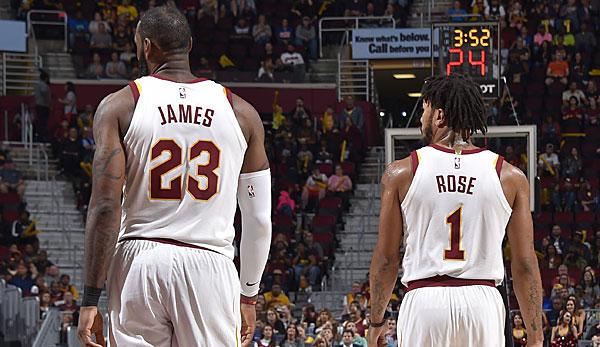 Yesterday, rumors were circulating that Derrick Rose may be considering ending his career. LeBron James commented on the matter and said that he would support the ex-MVP in any decision. Coach Ty Lue, on the other hand, believes in a return.

“We want the best for him, no matter how he chooses,”explained LeBron James after the Cavs’ victory over Charlotte Hornets,”At the end of the day you can’t trade anything for vitality. We all know what injuries he had in his career,” James also emphasized that he hoped the former MVP would return to the court.

“On Friday evening, Adrian Wojnarowski and ESPN’s Dave McMenamin told us that the Guard was thinking of a career break. Because of an ankle injury, Rose has missed 11 of the 18 season games so far.

One source told ESPN that Rose was mentally burned out after the numerous injuries. Coach Ty Lue, on the other hand, was optimistic after the Hornets game that D-Rose would return. At the moment, however, he is not on the team.

LeBron doesn’t seem so sure about it,”We want what’s best for Derrick. Whether he comes back or not, we want him to be happy as a man and father.”