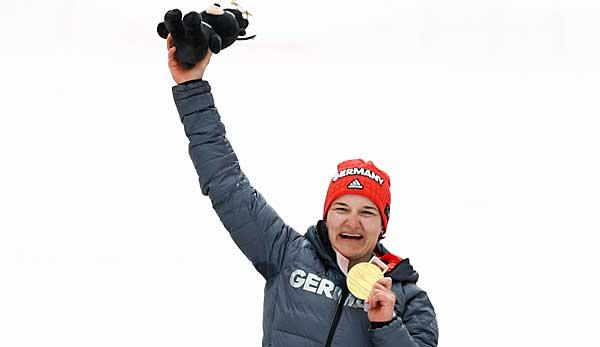 Anna-Lena Forster gave the German Disabled Sports Association (DBS) a great finish at the Paralympics in Pyeongchang. The 22-year-old racer from Radolfzell triumphed in slalom on Sunday in the seated class and won her second gold medal after winning the super-combination:”It feels like a dream, it’s crazy, the firecracker,” said the 22-year-old beaming with joy.

In addition, Andrea Rothfuss secured precious metals for the fifth time in South Korea in the standing class in difficult conditions at the Jeongseon Alpine Centre. After four silver medals, the 28-year-old won bronze in slalom:”This is madness. I am super happy,” said Rothfuss.

Andrea Eskau also continued her success story on the last day and won her sixth medal. The 46-year-old athlete from the USC Magdeburg finished 4×2.5 km behind Ukraine and Canada in the mixed relay together with Alexander Ehler and Steffen Lehmker.

However, Forster was the focus of the German team on Sunday. After two dream runs she won with 5.37 seconds ahead of Momoka Muraoka from Japan. Austrian Heike Eder came third. Anna Schaffelhuber, who lost her leg protection while driving, missed the bronze by 0.33 seconds in fourth place:”That’s annoying, but when I look back over the days, I can be satisfied,” she said.

Best German participant at the 12. However, the Winter Paralympics was Eskau. My collection here is now complete. I particularly like the look of bronze,” said Eskau.

For Ehler (48) and Lehmker (29) it was the first medal in South Korea. Eskau has already won gold in biathlon over 10 and 12.5 km, silver in cross-country skiing over 12.5 km, 5 km and in sprint. A total of 15 medals at the Paralympics are now on their track record.

The German team finished the Paralympics in South Korea with 19 medals (7-8-4) and fifth place in the medal classification. In Sochi 2014 there had been 15 (9-5-1), nine of which were gold medals.

The seven gold medals from Pyeongchang were won by Eskau (2), Schaffelhuber (2), Forster (2) and Martin Fleig, who won the first men’s medal for Germany after eight years. Added to this are eight silver by Rothfuss (4), Eskau (3) and Schaffelhuber. Clara Klug (2), Rothfuss and the cross-country mixed relay team also won bronze.