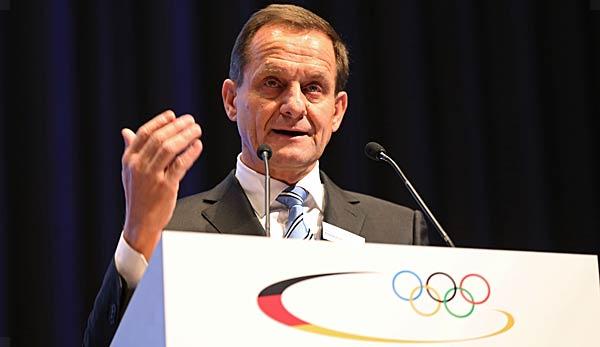 Alfons Hörmann remains President of the German Olympic Sports Federation (DOSB). The 58-year-old received 383 of the 450 votes cast in a battle vote at the general meeting in Düsseldorf and was thus re-elected.

The president of the German Triathlon Union (DTU) had announced his candidacy only a few minutes before the election. He got 61 votes.

“I would like to thank you for the great vote of confidence and will continue to work with a powerful team for Sportdeutschland,” said Hörmann. “I will cultivate a style that is characterised by transparency and openness.

Engelhardt, who has been one of Hörmann’s strongest critics within the DOSB since an open confrontation at the Parliamentary Evening in Berlin in June at the latest, had indirectly criticized the incumbent beforehand above all for his allegedly bad leadership style.

It is necessary to build bridges, to establish other manners, said Engelhardt at his presentation. “The aim is to regain the confidence of the population through exemplary behaviour”, he added and called for “the establishment and maintenance of a team-oriented management style”.

Before the election, Engelhardt stressed the rather symbolic value of his candidacy. “I know that this candidacy will not prevent the re-election of the president. The candidacy should contribute to the fact that several candidates should also be taken for granted in sport in a democracy. I hope that the goals I have mentioned here, which are a matter close to my heart – no matter who wins the election – will gain more weight and influence in the actions of the DOSB,” said Engelhardt.

Hörmann had left it open in the run-up to the general meeting whether he would run for battle. In a world interview, Hörmann said that the office of DOSB president was purely honorary. If one has to struggle for this office, then that is not the right condition to fill such an important position.