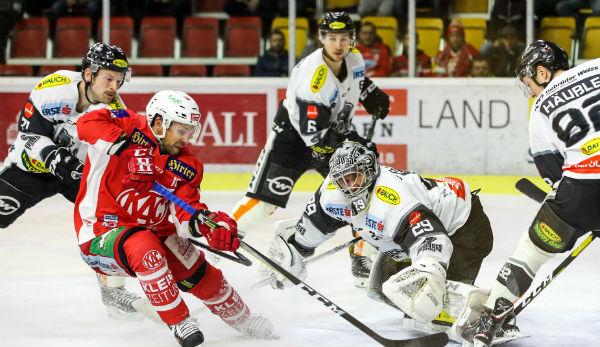 The KAC has taken the lead in the Erste Bank Ice Hockey League. On Tuesday evening, the Klagenfurt team won 6-4 against Dornbirn for the sixth time in a row, taking advantage of a slip by the Graz 99ers. The previous leader had to admit defeat with 1:3 at Fehervar and is currently one point behind the Carinthians in second place.

Third are now the Vienna Capitals, who exchanged places with Bolzano after a 5:2 direct duel in Vienna. The Black Wings Linz secured sixth place with a 5:0 at the taillight VSV, as the HC Innsbruck lost 4:6 at Znojmo.

Dornbirn gave the KAC a balanced fight over long distances, but finally took decisive penalties. So the “Rotjacken” acted in a brilliant final third twice in 5:3 majority and did not miss these chances. Nick Petersen scored three goals in the Klagenfurt competition. The Canadian first equalised the Vorarlberg’s lead with a 1-1 undercut, then scored a 3-3 advantage and scored a shot into the empty goal in the final.

The KAC could increase with the conditions of 1:2 after two thirds, perhaps also by the customer from Szekesfehervar. Dornbirn, of course, held back, six of the seven goals in the final third were scored in powerplay. Kevin Macierzynski equalled for the DEC a little more than six minutes before the end, before the KAC went on.

Fehervar again proved to be an unpleasant opponent for the people of Graz. If two close victories looked out before that, the Styrians left the ice on Tuesday as losers. After a goalless first third, the Hungarians managed a double strike in the 33rd minute within 25 seconds. The people of Graz were not supposed to recover from this, even though Dwight King shortened the time shortly before the end of the third. In the final section Fehervar made everything clear through Janos Hari (58th) late.

The Vienna Capitals got off to a better start against Bolzano, Emilio Romig hit from a sharp angle. The South Tyroleans rewarded themselves with the equalizer before a cross pass by Rafael Rotter from a Bolzano player found his way into their own goal (31st). Riley Holzapfel (35th) scored the next goal against unfocused guests. The Capitals fluctuated once again, but in the end they managed to make ends meet.

Innsbruck took the lead early in Znojmo, but then missed the third completely. Znojmo scored four times from the 11th to the 19th minute, at the beginning of the second stage the Czechs increased their score to 5:1. Innsbruck only regained speed afterwards, after two powerplay goals Levko Koper brought the Tyroleans up to one goal in the 49th minute. The HCI started a storm run, but 23 seconds before the final siren Znojmo hit the empty goal for the decision.

For the Black Wings, Brian Lebler was their guarantee of success. After 35 seconds of play, the attacker finished the match to take the lead from Linz and also made the decision with his second goal in the middle third (35th). The SAAM had little to oppose this. Andreas Kristler scored against his Carinthian ex-club in a lower number for the Linz team.