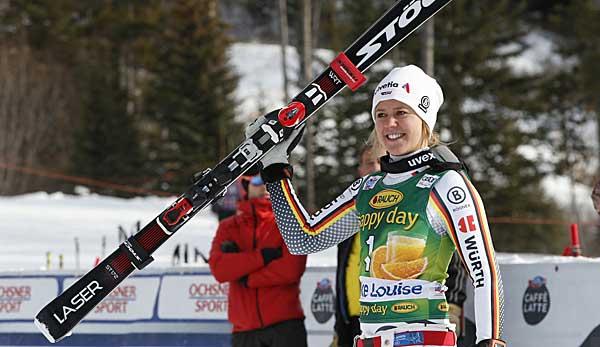 Viktoria Rebensburg (Kreuth) performed brilliantly on the historic day for Mikaela Shiffrin in the Super-G of Lake Louise with third place. Behind the outstanding Shiffrin, who is now the first person to show victories in all six Alpine disciplines, and the two-time Olympic silver medallist Ragnhild Mowinckel from Norway, the 29-year-old rode on the podium for the first time in the WRC winter.

“I didn’t find the right feeling in the downhill, I didn’t really get to drive,” said Rebensburg: “But the Super-G also felt good in practice. I knew I had it in me. I think it really was a very solid ride. Especially the upper part was quite good, I lost a bit of time below.”

With her almost flawless run with starting number one, Rebensburg also fulfilled the DSV internal standard for the World Championships in Are, Sweden (February 5 to 17, 2019).

She missed six hundredths on Mowinckel and 0.84 seconds on 23-year-old Shiffrin, who celebrated her 46th World Cup victory in the absence of injured Lake Louis Dominator Lindsey Vonn (USA) and thus improved to fifth place on the eternal list of the best.