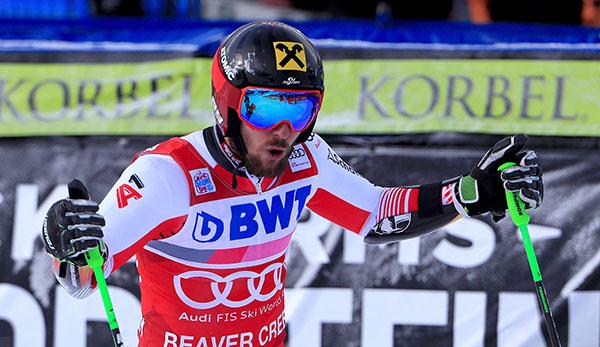 “Home. As soon as possible!” After a one-week stay in the US and a second place in the giant slalom of Beaver Creek, young dad Marcel Hirscher has made his journey home in a flash. The man from Salzburg was much more happy for winner Stefan Luitz than annoyed about his missed 60th World Cup victory. However, the elaborate trip to North America had somehow also been a half thing.

Since last Tuesday, the seven-time overall World Cup winner had trained in Colorado and tested material in Vail. On Sunday, after a mistake by Luitz in the decision, he already looked like the sure winner, but then the “title defender” for the first time since December 9, 2017 in a giant slalom not quite at the top. “Luitz had been able to catch up with the “quite easy”. “I drifted in the finish, he pulled through,” says Hirscher.

In the private jet of the Red Bull rider from Eagle to Denver Hirscher comforted himself after the 225th World Cup start with the 125th podium place of his career. And he was happy with Luitz. “The man has more than earned it after his stony way”, he congratulated the German, who had returned after a cruciate ligament rupture.

But the fact that the trip around half the world would obviously have had room for improvement also resonated through the Salzburg man. “It was already a week with a lot of uncertainty and rather poor training conditions”, said Hirscher and mentioned uncertainties about the direction of material development. “That’s why I’m so happy when I can really get back into training at home.”

In Beaver he squeezed out the maximum in both passes. “It wouldn’t have been a millimetre more”, the 29-year-old complained about a slope that, in his opinion, was strongly decreasing. Indeed, he and Luitz only managed the tenth and eleventh time, respectively, while the outsiders Thomas Tumler (SUI) and Rasmus Windingstad (NOR) were in front.

“I’ve never competed in World Cup races on such conditions before. For a men’s race it was hard at the limit,” said Hirscher. “I almost dropped out twice, so it was almost a small win for me overall.”

After Sölden’s cancellation, however, the Levi slalom champion was enormously pleased to see that he was also further ahead in the giant slalom. “That was actually the most important thing. The start of the season has been a success”, said the seven-time overall World Cup winner, who despite his paternity will hardly make any cutbacks in his racing program in the foreseeable future. After Val d’Isere follow Alta Badia, Saalbach (Sölden substitute) and Madonna until Christmas.

After two days of training on the Reiteralm, Hirscher will arrive in Val d’Isere on Friday and pack his raincoat as a precaution. In the ski resort in Savoyen you will find his “local mountain”. “But there is now a good story for every place,” Hirscher waved off.

Last year, an almost one-year winning streak in the giant slalom had also been broken there, but since then Hirscher had remained unbeaten again up to Beaver Creek including the Olympics. Since the start of the 2016/17 season, Hirscher has been on the podium in all 16 World Cup giant slaloms. His last failure in this discipline, in which he won the overall ranking five times, as in slalom, happened in February 2011 in Hinterstoder.