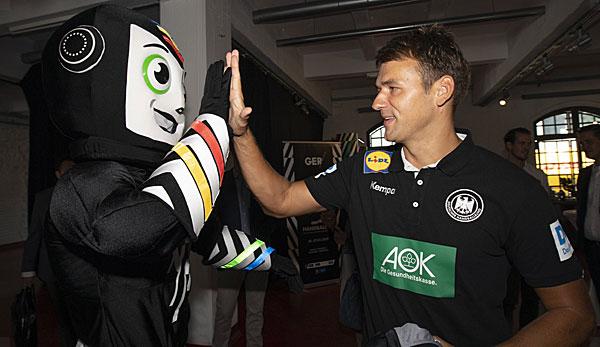 The World Handball Championships in Germany and Denmark begin on 10 January. Before the whole hot phase of preparation begins, SPOX met with national coach Christian Prokop for an interview in a cafe in Leipzig.

Prokop spoke about his self-sacrificing fight against his much too early career end as a player, his intensive cooperation with Stefan Kretzschmar and tips from Heiner Brand. The former backseat player also reported on his lessons from the messed up European Championship, his mistakes and the composition of the World Cup squad.

SPOX: Mr. Prokop, you only live to be 40 on Christmas Eve, but as a player and coach you have already experienced a lot. It took you a while to find handball, didn’t it?

Christian Prokop: My father trained the A-youth of my home club Köthen, which is why I automatically came into contact with the sport. But at first, the fire for handball didn’t grab me so tight. I was more interested in football, swimming and sometimes also chess. In football, however, I preferred to pick daisies rather than take care of the ball. (laughs) I was pretty good at swimming, but I had a cold all the time. My parents told me to try handball in the hall. Then it quickly became clear: This is my sport.

SPOX: It was undoubtedly the right decision, as the coming years have shown. How would you describe the handball player Christian Prokop?

Prokop: I was an ambitious, team-oriented player who enjoyed more good passes and duels than his own goals. I could make a lot of right decisions in the attack, but unfortunately I was too weak a defender.

SPOX: When you were 19 years old, a serious injury in a B international against Egypt ruined your career.

Prokop: I ran a speed counter-attack and decided, because two opponents approached me from the side, from full speed to a foot toss – at this moment the knee twisted. The result: meniscus rupture including cartilage damage. That’s when disaster took its course.

SPOX: At the time of the injury, you were a second division player. It’s unbelievable that you still made it into the Bundesliga afterwards.

Prokop: Despite several operations and subsequent rehabilitation measures, I managed to play in the Bundesliga. This was due to a mixture of good medical treatment and family support. Besides, I didn’t want to admit that competitive sport should be over.

SPOX: You played in the Bundesliga for Wuppertal and Minden. At the age of 24, however, you had to end your career. They really tried everything, even switched their game to left-handedness.

Prokop: I simply knew that my knee would not withstand the strain I put on it as a right-handed person. So I played left to shift the load point. I just wanted to do everything I could to keep being a professional handball player.

SPOX: A change from right to left might be a very complicated undertaking, isn’t it?

Prokop: I was not untalented with my left hand. My father is left-handed, which probably genetically influences me. In addition, we sometimes played complete training sessions with the “wrong” hand in our youth. So I just had to wake up some nerve cells, so I practiced a lot. I spooned my soup with my left hand, played table tennis or tennis with my left. In addition, of course, there was the throwing training. I gained about 70 percent of the throwing power I had with my right hand. One advantage was that I could lock the door with both hands.

Prokop: Right. In spite of the relief, swelling of the knee was a recurring problem. That was the point for me to have to stop competitive sport. Even though it was difficult, I knew that I really had left no stone unturned. I reoriented myself, completed my teacher training and got my training certificate, because without handball I could not imagine my future life.

SPOX: From the age of 24 you worked as a coach in Hildesheim, Braunschweig, Hannover-Anderten, Magdeburg II, Schwerin and Essen. Who are your teachers?

Prokop: I was almost always head coach, which is why I couldn’t really learn much. It was more about learning by doing. Only during my time in Magdeburg did I benefit from the lively exchange with Frank Carstens. Of course, my father was always an important role model. The way he led teams pedagogically shaped me.

SPOX: Your breakthrough began in Leipzig in 2013. They led the association into the HBL and established it there. What does this phase of your career mean to you?

Prokop: That was by far the best time for club handball. Not only because of the successes, but also because of the great cooperation with the people involved. It was very family. You could just tell we were a good match. As a team, we have managed to establish men’s handball in Leipzig. Leipzig has become my home.

Prokop: He was and is an absolute confidant for me. I got honest feedback and felt his support when I needed it. Clear words have also been spoken at times, but afterwards also reconciliatory ones. We can still exchange ideas honestly. The great thing about him is he’s not building a front.

SPOX: You felt so comfortable at SC DHfK that you hesitated for a long time in 2017 even when the offer for the position of national coach came.

Prokop: It felt to me a little as if I would leave the club alone on its way. That’s why I actually wrestled with myself for some time. But to be honest, who will say no to the chance of becoming a national coach?

SPOX: Everything went like clockwork at the beginning of your term of office. Their first big tournament, the European Championship in Croatia, was a disappointment with the elimination in the main round. What lessons have you learned from the EM?

Prokop: We have carried out an intensive reflection of the tournament, be it in the tactical area, in the composition of the management, in the communication, in the hotel procedures and so on. We took a clear look at the points in which there is a need for optimisation. The trip to Japan in June was also important in this context in order to enhance our relationship of trust. I am optimistic, but of course a sense of achievement is needed to underpin this.

SPOX: What tactical conclusions did you reach during the processing?

Prokop: I orientate myself even more on the individual strengths of the players. I came to the national team with crystal clear ideas, but underestimated the time factor. In the brevity of time to introduce new automatisms is not so easy. In stressful situations, one tends to recall familiar automatisms. In school, you’d talk about frontal teaching, that is, pretending to be everything. That was wrong. I now involve the experienced players much more in different decisions, I exchange a lot more with them.

SPOX: Will this also be the case at the World Cup?

Prokop: Yes. But there will also be situations – between the games against Russia and France there are not even 24 hours – in which this is hardly possible. There simply has to be a 100 percent relationship of trust that the tactics are given and then implemented. I presume to be able to read a game well and analyse my opponent well in order to give my team the decisive help they need.

SPOX: What should change in the hotel processes?

Prokop: You have to stay fresh in your head during a tournament. That’s why it’s also about doing things together that are fun and where people laugh together. Internal tournaments at the table football table or on the dartboard, for example. At the same time, however, phases are also important in which everyone has his or her own peace and quiet and can pursue his or her rituals.

Page 1: Prokop about a hard time, his way to the national coach and Kretzsche

Page 2: Prokop on the criticism of his person, the World Cup squad and the home World Cup