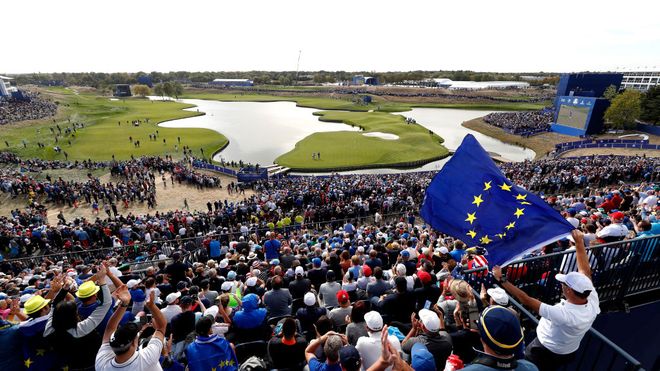 Not only the fans and clubs of team sports fear ghost games. Now the PGA is also considering holding the Ryder Cup in autumn without spectators.

The Ryder Cup of golfers is also threatened by a ghostly backdrop in view of this year’s corona crisis. As the US PGA of America confirmed on Monday evening, it is currently being examined whether the most important team competition in the world can be held without spectators.

The prestige duel between the best golfers in the USA and Europe, which takes place every two years, is to be staged in the US state of Wisconsin from 25 to 27 September. The Ryder Cup is the highlight of the golf calendar, especially for fans, and the atmosphere is comparable to that in a football stadium.

However, it remains to be seen whether fans really need to be excluded, Waugh continues: “The fans are, to a certain extent, the Ryder Cup.” Europe’s team captain Padraig Harrington therefore also pleads for a cancellation of the traditional event, should it not be possible to host it with spectators.

“Nobody wants the Ryder Cup to be played without the fans being there,” said the 48-year-old as early as the beginning of April: “There is no doubt that they will make the tournament much better. Non-golfers and golfers around the world watch the Ryder Cup because the spectators create excitement.”