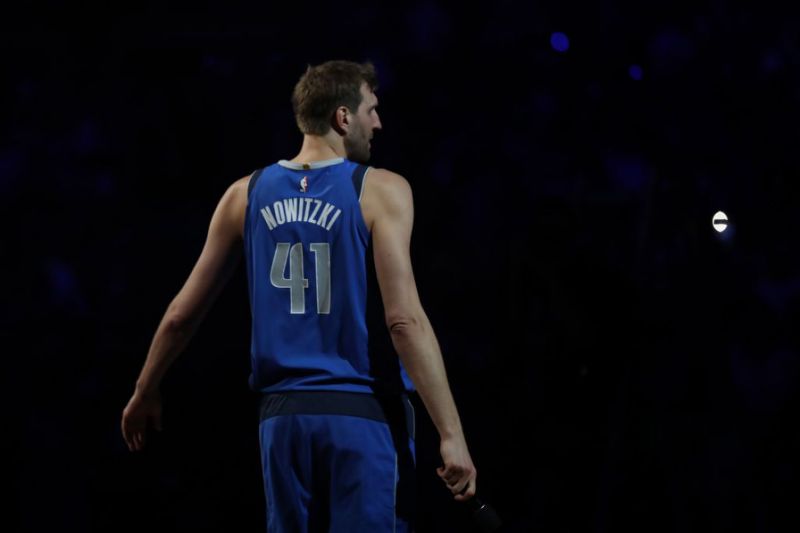 Dirk Nowitzki also likes to look back on his career after its end. His last home game with the Dallas Mavericks remains unforgotten for the German.

It has been more than a year since Dirk Nowitzki hung up his basketball shoes.

But even today, the NBA legend likes to remember his time with the Dallas Mavericks. He was the ninth player to be selected in the 1998 NBA draft and began an adventure he never expected.

“My plan was to either go to college or stay in Europe,” Nowitzki told Ernie Johnson in an interview from NBA Together. “I didn’t even have the NBA on my radar until that hoop-summit game in San Antonio.”

It was a world junior team playing against the best in the US. Nowitzki shone with 33 points, 14 rebounds and three steals. He said, “That one game changed my whole life.”

Nowitzki absent from the draft
At the draft itself, the German was not even present. “I was in Germany. Even though I was a lottery pick, I wasn’t 100 percent sure I’d get picked. I was super thin and just not sure if my body was wide enough,” Nowitzki remembered.

The 19-year-old only found out the next morning that he was one of the top 10 picks.

The first year in the NBA was a tough one. “I had trouble adjusting at first. The pace of play, the language barriers – and it was a lockout year, which meant 50 games in about two and a half months. It was incredible. It was all really overwhelming for me.”

Geschwindner follows Nowitzki to the end
Until the end of his career, Nowitzki was accompanied by his former coach and mentor Holger Geschwindner, who discovered him by chance in the summer of 1993. “He motivated me in all areas, not only in basketball. He made me better on and off the court,” Nowitzki emphasized.

His methods were unusual and new, explained the NBA legend, “but I was a kid and I enjoyed it. I quickly saw improvements and always believed in him.”

Even during his last two years he still worked with Geschwindner. “We were very close,” Nowitzki made clear.

At 26, he even traveled through Australia with Geschwindner. “People just said, ‘You’re 26. Why are you on vacation with a 65-year-old? But I learned so much from him and we talked about everything. He was my mentor and helped me a lot.”

Nowitzki: “It was an incredible journey”
He will never forget his last home game, in which five of his idols – Larry Bird, Detlef Schrempf, Scottie Pippen, Shawn Kemp and Charles Barkley – paid homage to the seasoned campaigner. “The fact that those five guys were there was overwhelming to me. It meant so much to me, I can’t even describe it.”

Looking back, Nowitzki said: “When I came here, I naturally didn’t know where this journey would take me. It was an incredible ride, an incredible journey with so many people helping me along the way.”