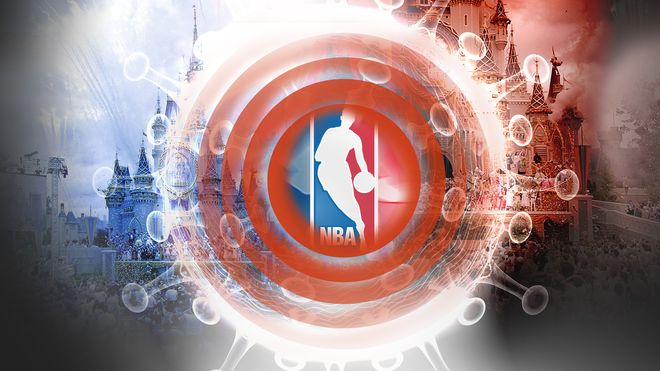 The NBA has many details in mind in its plan for the league sequel to Disney World. Some of the measures are curious. But campus life still has its dangers.

In order to be able to play their season to the end despite the Corona crisis, the NBA has presented a plan that has been thought through to the smallest detail.

On 113 pages, rules have been laid down to ensure that the rest of the season can be played safely under quarantine conditions.

The Disney World campus in Orlando, Florida, is to become a refuge for the entire NBA family – but the dangers from outside seem to be increasing, as the Sunshine State is becoming the new Corona epicenter of the USA.

Corona is raging in Florida – is the NBA plan on the rocks?
On Saturday alone, 4049 new corona cases were reported, surpassing even severely affected countries like Peru or Bangladesh. Already on Friday, a new record was set with 3822 new infections.

“In fact, Florida has all the prerequisites to become the next major epicenter,” concludes a new report by epidemiologists from the Children’s Hospital of Philadelphia and the University of Pennsylvania: “The risk there is the worst there has ever been in our predictions.

With a total of 94,000 infections, Florida is already one of the states of the USA most affected by corona. And this is exactly where the NBA stars are supposed to finish their season – albeit under quarantine – starting July 7th?

Considering that Disney World is located in the Corona hotspot Orange County, this seems almost negligent.

NBA travels with 770 people
22 out of 30 NBA teams were invited, each franchise is allowed to travel with 35 people (17 players plus team personnel) – this means that from the beginning of July a total of 770 people will be accommodated or crammed together in three hotels of the amusement park (Yacht Club, Gran Destino and Grand Floridian) – and that for almost three months. On July 31st, the games are scheduled to start, and on October 13th, the champion will be announced.