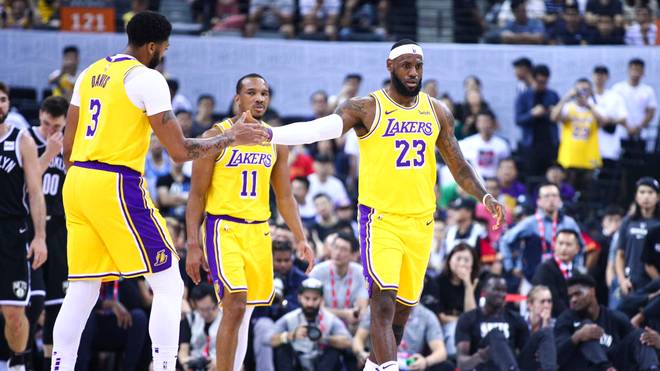 The Los Angeles Lakers will have to do without a player from their usual starting five in the playoffs. The substitute is famous for a blackout.

Bad news for the Los Angeles Lakers: In the battle for the title the team around superstar LeBron James has to do without Avery Bradley.

As ESPN reports, the Lakers Guard will not participate in the continuation of the NBA season at Disney World in Orlando at the end of July for family reasons.

The main reason for Bradley’s decision is therefore his six-year-old son Liam, who, due to a medical history, would probably not receive clearance for the bladder in Orlando.

Bradley: “Games for my family Basketball”
“As much as I burn for the Lakers and my team, I end up playing basketball for my family. That’s why I can’t imagine making a decision in the current situation that would put my family’s health at the slightest risk,” Bradley said.

Instead, the 29-year-old wants to use the time to “tackle projects that will strengthen my community.” Along with Kyrie Irving, Bradley is one of the most active players when it comes to campaigning for more social justice in the current situation in the USA.

His cancellation means that Bradley, who was in the starting five in 44 of 49 games this season, will probably forfeit around 650,000 dollars in salary.

Free Agent Smith to replace Bradley
However, the Lakers have apparently already found a replacement for Bradley – Free Agent J.R. Smith is to fill the gap.

Lakers President Rob Pelinka and Smith’s advisor Rich Paul have already negotiated a commitment of the former Sixth Man of the Year, according to ESPN.

Smith, who hasn’t played in the NBA since November 2018, auditioned for the Lakers in February before the team chose Dion Waiters.

LeBron Smith thinks back with horror
Lakers superstar James knows Smith from their shared times with the Cleveland Cavaliers, when the two together took the title in 2016.

However, the 34-year-old is remembered by many for his incredible action in the 2018 NBA Finals. After a rejected free throw by his teammate George Hill, Smith snatched the rebound with 4.7 seconds remaining and a tied score.