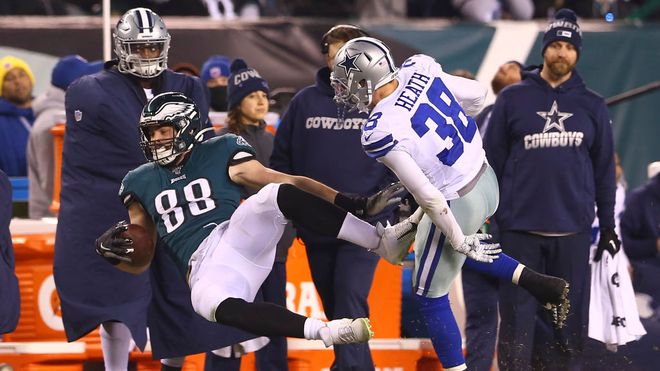 During the evening trip in South Dakota Dallas Goedert of the Philadelphia Eagles takes a bad blow. The suspect is arrested and released.

Dallas Goedert had to take some hard hits on the football field – but the tight end of the Philadelphia Eagles was rarely hit so hard.

While visiting a bar in Aberdeen, South Dakota, the 25-year-old was beaten up behind his back by another guest and even lost consciousness, according to an ESPN source.

Surveillance footage of the incident, which already occurred on Friday, shows the NFL star did not see the blow coming and was caught off guard.

NFL star in hospital – suspect released
Goedert, who went to high school in South Dakota, was admitted to Avera St. Luke’s Hospital according to police, but was discharged after treatment.

The police also announced that a suspect had already been arrested. “Investigations led to the arrest of Kyle Douglas Hadala, a 29-year-old man from Sarasota, Florida. He was charged with assault and battery.

The suspected thug is, however, initially at large again, but will have to stand trial on 10 July.

Goedert was lucky in his attack and did not suffer a serious injury. In the Eagles he had played a good season with over 600 yards and five touchdowns. The Football League plans to start the Regular Season on September 10th.