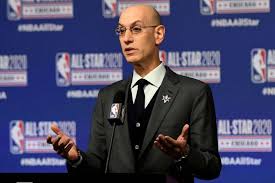 Due to the lack of viewer noise at the upcoming restart in the NBA, Commissioner Adam Silver is considering censoring the trash talk of the NBA stars.

Censorship in the NBA?

On July 31st the NBA wants to restart the abandoned season in Orlando. Due to corona-related hygiene measures, no spectators will be allowed at the upcoming games.

As already experienced during the football ghost games this season, every word of the players on the pitch can be heard by the spectators. For the one or other football fan this was quite an interesting insight into the events on the pitch.

NBA fear of trash talk
In the USA, on the other hand, fear of the trash talk of the NBA stars is growing. The league is notorious for the sometimes gross insults between players during the game. This psychological warfare is a popular means of intimidation among the stars.

Now NBA commissioner Adam Silver is concerned that the trash talk could get into the television broadcast unfiltered due to the missing viewer noise. It is possible that the live broadcast would have to run with a delay to censor the players’ insults.

“I think there must be some boundaries for language. Players may need to adjust their language a little bit, because everything will probably be picked up by microphones and, seriously, we may have to put in a little delay to censor any insults,” Silver told Time magazine.

Starting on July 7th, all NBA teams will be in quarantine, and then start on July 31st to determine the new champion in the playoffs. Currently, 25 of 351 players have already tested positive for COVID-19. Silver also announced a few days ago that he would not push through the restart “at any price”.

Courts are probably painted with slogans
NBA-Star rangelte with cows