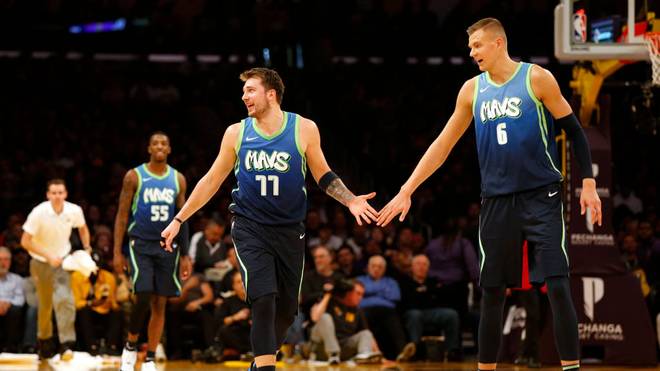 The Dallas Mavericks celebrate a successful dress rehearsal before the restart of the NBA. Luka Doncic dreams of jumping to fourth place in the West.

The dress rehearsal was a success for the Dallas Mavericks.

In the last preparatory game before the NBA restart, the Texans beat the Philaldelphia 76ers 118:115 after overtime. Especially the star duo of the Mavs with Luka Doncic and Kristaps Porzingis shone.

While the Slovenian was top scorer with 23 points and also contributed seven rebounds and six assists, Porzingis managed a double-double with 17 points and twelve rebounds. Remarkable: The Latvian scored 13 of his 17 points within five minutes in the first quarter, when Porzingis kept the 76ers in check with a 13:3 run alone.

In the final quarter and in overtime Mavs coach Rick Carlisle spared his starting five, so that the reserve team secured the victory.

Doncic dreams of jumping to fourth
Carlisle was subsequently satisfied with the performance of his team. “It was a physical challenge, which I think is good for us at this stage because we are now fighting in eight play-off matches. I think all of these matches will be physical,” he said after the game.

For Dallas, the night from Friday to Saturday is the night when the Texas duel against the Houston Rockets begins. Doncic and Co. are currently ranked seventh in the west, but the Slovenian has already announced that he wants to conquer fourth place.

“We can still be fourth in the west and that’s our goal, too. We want to win each of the eight Seeding Games,” he said in an interview with the Mavs team website. At the moment, the gap to fourth place and Utah Jazz are 2.5 games behind.

NBA star has an underwear problem
Next record for Jordan sneakers?