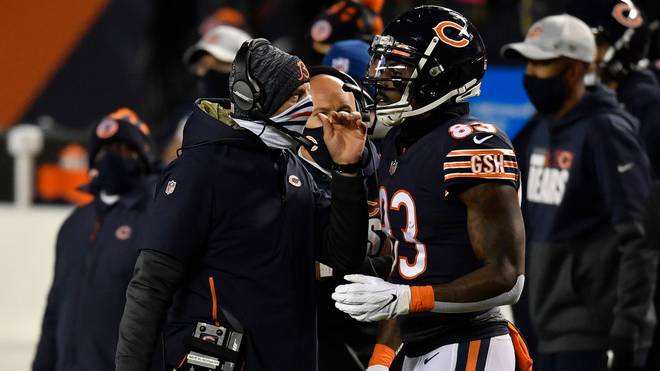 The victory of the Saints bei den Bears is overshadowed by an unpleasant action of Javon Wims. The Chargers lose and set a sad record.

The New Orleans Saints trembled to their fourth consecutive victory in week eight.

In the Chicago Bears, the franchise won only in the overtime with 26:23. Although the Saints pulled away to ten points in the final quarter, the Bears fought back once more and equalized 13 seconds before the end of regular playing time.

Will Lutz finally made the decision with the decisive field goal from 35 yards. Drew Brees scored 31 of 41 passes for 280 yards and scored two touchdowns.

However, the game was overshadowed by repeated punches from Javon Wims. The Bears’ wide receiver hit the head or helmet of Saints-Cornerback C.J. Gardner-Johnson in the third quarter and was sent off the field.

Bears coach Matt Nagy said after the game that the blow was “totally unacceptable”.

“We talked to him and told him that this is not the way it works”, said Nagy. “One of Jason’s strengths is his character and who he is as a person and he apologized, but in this game he showed himself differently. I still haven’t seen the action, but from what I heard, it wasn’t good.”

The Los Angeles Chargers have lost in double digits for the fifth time this season after taking the lead.

At the Denver Broncos, coach Anthony Lynn’s team had to admit defeat by a narrow margin of 30:31, although the Chargers had already led 24:03 in the third quarter.

Thus Los Angeles has set a sad record: As the first franchise in the history of the NFL, the Chargers led by at least 16 points in four consecutive games and still did not win. No other team has ever done this in three consecutive games.

“What we need to do as a team now is to find out why we’re messing up the lead we’re working for and why we’re not finishing the fourth quarter games the way we need to. It is very disappointing. The boys feel bad,” Lynn said after the game.

His player was also disappointed. “I wish I knew,” said Wide Receiver Keenan Allen when asked why the Chargers keep losing their mega-leadership.

Chargers quarterback Justin Herbert, who scored 29 of 43 passes for 278 yards and scored three touchdowns but also two interceptions, vowed to “do better, watch more videos and get back at them.

Seahawks beat 49ers thanks to Wilson

Thanks to a strong performance by Russell Wilson and a stable defense, the Seattle Seahawks won 37-27 against the San Francisco 49ers.

The Seahawks’ quarterback scored 27 of 37 passes for 261 yards, scored four touchdowns and led his team to the top of the NFC West standings.

Two of the four touchdown passes were caught by D.K. Metcalf, who once again raved about his colleague Wilson after the game: “The ‘Russ to MVP’ move is back on track,” said the wide receiver.

Seahawks coach Pete Carroll also praised his quarterback. “Russell played fantastically today. He knew how this game was going to go. We had to throw the ball fast and we needed a lot of short passes and all that. He did a great job.”