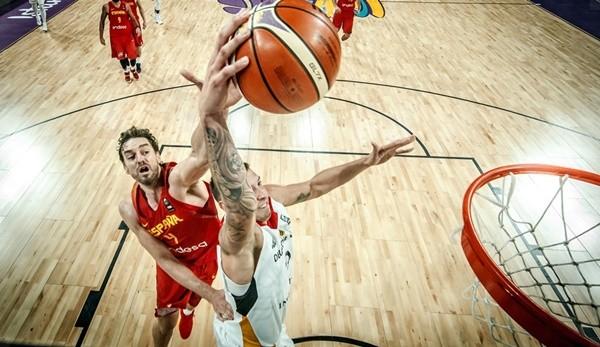 Daniel Theis will continue his career after a strong EuroBasket – the international player is already preparing for his first season with the Boston Celtics in the USA.SPOX spoke to Theis about the NBA switch, his rivalry with Dennis Schröder and his Boston goals.

SPOX: When did it become realistic for you for the first time that it would really work this summer with the NBA?

Daniel Theis: I didn’t really know it until the first week of July, when the Free Agency started in the NBA and we were able to negotiate.There had been some loose conversations before and I knew it could happen, but certainty only came from this point in time.

SPOX: Boston was one of the most active teams this summer.Was it therefore unclear in the meantime whether it would work out with a squad?

Theis: No.Right from the beginning I was told very clearly that a place would be there for me, they wanted me.At that time it was already known that they – or rather, we – would try to get Gordon Hayward, but no decision had yet been made.But the negotiations with me ran independently.

SPOX: Did you get a rough idea of the role you should play in Boston?

Theis: It’s still a bit difficult because so much has happened.Four out of five starters of the last season are no longer there, so a lot of things will have to settle down first.But I do know that coach[Brad Stevens, d.Red] wants to see me above all defense and rebounds, he attaches great importance to that.Of course, that suits me very well, so I’m quite optimistic about the whole thing.

SPOX: You said during the European Championship that you don’t really care how you play offensively as long as the defense fits.

Theis: Yes, that’s just my first area of expertise in basketball.You have to look in the team to see what your role is, where you can help the team.One of them is primarily supposed to serve assists, another throws threesome by threesome.Take a look at the Celtics squad: Kyrie Irving and Hayward, two players who scored well over 20 points on average last season.Marcus Morris had about 15 points, Al Horford also had 15 or 16 – I don’t go there blindly and think I should throw here every time.I’m not that naive.My priority is to play good defense and get rebounds.I will try to get our scorers off the ground by using blocks, so I’ll help the team best.

Theis: Right.For the fact that they won their conference, these were not necessarily strong areas, but for me they are probably the best attributes.Maybe this is a niche for me.

SPOX: Is it real for you that you are an NBA player from now on?

Theis: Hard to say.I think it’s coming with the times.If you’ve worked so long for something and it actually happens, it probably always takes a moment.I’m incredibly pleased, of course.

SPOX: As you know, the Celtics are also quite an ambitious team…

Theis: Exactly.If you look at the team after all the moves, it’s obviously a squad that is supposed to play for the championship in the next few years.That would be the next step, as they were already in the conference finals.That makes it all the better for me.I have won a lot in the last few years at Bamberg and I am certainly a bit spoiled.Now to join such an ambitious team is actually ideal for an athlete.

SPOX: In Boston you meet a coach in Brad Stevens, who told me that he “stole a lot in Europe” and also mentioned your ex-coach Andrea Trinchieri.What was the contact with Stevens like so far?

Theis: In the days I spent in Boston, he has spoken to me several times and led the training.His system is actually quite similar to that of Trinchieri.There are many freedoms, as a player you should be able to read what the Defense does and react to it.I’ve known that for the last three years and I think it can help me settle in quickly.

SPOX: When your signature was announced in Boston, there was some speculation that you wouldn’t be competing in the EuroBasket, but you were there.Did Celtics have an opinion on this?Maxi Kleber, for example, had said that the Mavs didn’t want to see him at the European Championship.

Theis: I don’t think you can really compare the situations of me and Maxi.He has a slightly longer injury history with his knee and feet, in recent years he has had problems again and again.It was my shoulder a few years ago, but apart from that I never had bigger things.That’s why Celtics and Coach Stevens were very positive.They even thought it was the best thing that could happen to me right now.I played five-on-five at the highest level, many of the NBA players were not allowed to do that over the summer for insurance reasons.

SPOX: During the Supercup you had to go to Boston again.

Theis: Yes, I was there for a few days so that everything could be tested again: strength, athletics, things like that, they wanted to see me in action again.I also wanted to get to know the coach and his philosophy a bit better, but it was all arranged.Just as it was agreed that I would fly directly to Boston after the tournament, so that I would arrive there in a completely fit and rhythmic manner.They also have something of that, even though I missed the first few days of training.

SPOX: What was the contact to Boston during the European Championship?

Theis: I talked to the strength trainers and physios on a daily basis about how I felt and felt.There was actually at least one message before and after each game.I’ve heard from the coach every now and then.

SPOX: Do you fly to Boston with specific goals for your first NBA season?

Theis: I think it’s difficult to set a target for a certain period of time or something like that.With playoffs there will be well over 90 games, so everyone will definitely get his chance.And I want to be ready for that.For me it is important that I remain calm even if I am not used for three games in a row or if I am not used very little.I have to take that as an incentive to accelerate even more.You just can’t say:”Oh, shit!” because after that there are still 60 or 70 more games coming up, in which it can go better.It’s not about specific deployment times, it’s about bringing energy, playing defense and recommending me for further deployments.

Page 1: Daniel Theis about his move to Celtics

Page 2: Daniel Theis about his role, Garnett and a meeting with Schröder

NBA: Irving:”I was thrilled.”
NBA: Bogut goes to the Lakers