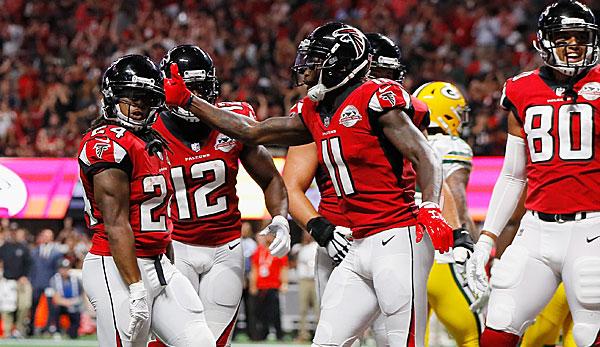 The Atlanta Falcons (2-0) inaugurated their new Mercedes-Benz Stadium with a safe victory.The Green Bay Packers (1-1) didn’t stand a chance at an offense show reminiscent of last season’s NFC Championship game.As in January, the guests suffered a large number of injuries.

While Devontae Freeman led the Falcons into the final zone on the first drive after eight simple layouts by one-yard run, the packers were able to answer directly via a one-yard run by Ty Montgomery.As a result, the abstinence of the two starting tackles Bryan Bulaga and David Bakhtiari made themselves felt in the Packers.

Aaron Rodgers rarely got the chance to extend Plays.The pressure continued to increase as the duration of the game increased and the thigh injury suffered by receiver Jordy Nelson did not necessarily help Rodgers to find targets quickly.On the other hand, Matt Ryan and Julio Jones clicked on each other as usual.The star receiver scratched the 100 yard mark at halftime.

Even before the half time the Falcons then moved away with the friendly support of Rodgers.The two-time MVP gave the Falcons the ball in a promising position before the break.They couldn’t be asked twice and could put the game on ice with the second running back in Tevin Coleman.

The Packers then tried to make a comeback with unnecessary penalties caused by Martellus Bennett and Geronimo Allison.All in all, Rodgers, who collected 50 pass attempts at the end of the race, simply didn’t have enough time to get his line through the continual collapse of his line.The injuries were once again not to be compensated for Green Bay against the champion of the NFC.

Matt Ryan (Atlanta Falcons):”It’s wonderful.From a player’s point of view, you can’t expect more from a stadium.The pitch is perfect and the stadium is loud.The atmosphere was really incredible and we were able to record players.Now we want to create traditions and create something that the city can be proud of.”

Aaron Rodgers (Green Bay Packers):”I take responsibility for the defeat because I am the leader of this team.I gave them seven points for fumble and seven points for the interception.In the end, we lost 11.”

Even with the first drive, the packers were able to compensate the first score of the Falcons in a convincing way.But as a result, the failures of Bulaga and Bakhtiari became noticeable.Rodger’s ability to lengthen play was the only reason he didn’t get knocked to the ground more often than Vic Beasley did at the beginning of the second half.The packers must hope for a speedy return of their starting tackles.

As in January, the Packers had to do without a large number of service providers on their journey to Atlanta.Bulaga, Bakhtiari and Nelson’s failures could not be compensated for the offense.For the defensive side, however, the relinquishment of Defensive End Mike Daniels was a particularly serious one.Daniels was the team’s best defender last season, underscoring his steep ascent with an outstanding performance against the Seattle Seahawks in Week 1.Without his pressure, the Falcons-Offense could perform almost undisturbed.Ryan was far too seldom under pressure and found his receiving options in the usual manner.

Trufant always seemed to be in the right place at the right time and was pleased with his excellent homework and several big placements.Before the break Trufant put the Falcons in scoring position with an interception in the opposing half.At the start of the second half, he picked up a fumble caused by Vic Beasley and put it in the house.

The tight end of the Green Bay Packers was perhaps the biggest unlucky guy on the field.Bennett not only had several drops that were clearly on his head, but also provided important first downs in the first half.In the second quarter, it also caused a superfluous passport interference penalty in the second quarter, which again eliminated the packers from gaining a lot of space.